George McEncroe founded Shebah - the all-female rideshare - in the midst of divorce and the realization that the weight of raising 4 kids now fell on her shoulders. She understands not only balance in life, but also balance in life’s darkest moments. George didn’t just find balance, she made it. 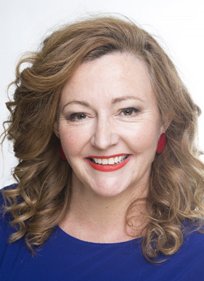 George McEncroe was brilliant, she was funny and calm. She bound the whole night together, even when there were hiccups. There was so much laughter! I am extremely happy I chose George to entertain our evening.

George was a great MC, professional and funny.

Georgina McEncroe was our Master of Ceremonies for the BAA Christmas Lunch ...and did a fantastic job. MCing a BAA Christmas Lunch is no easy feat with our lunches being notoriously noisy and unruly. Georgina did a brilliant job in keeping the audience under control when necessary and providing great comedic relief during the lunch. Georgina is an extremely professional performer. Her relaxed style was very appealing to our audience. I would thoroughly recommend her for any MCing work."

George McEncroe came late to her career in media and comedy, and is able to deal with serious issues sensitively, finding humor often in the darkest of circumstances.

From starting a new business, creating an award-winning Melbourne International Comedy Festival show, or collecting testimonies for the War Crimes Tribunal Georgina McEncroe has done it all..

George McEncroe has had extensive experience in leadership and resilience. With a blend of honesty and inspiration she can lead discussion, MC or keynote speak on anything from life change, culture shifting, technology, women in leadership, getting girls to the top, diversity, and courage when it counts.

George founded Shebah - the all-female rideshare - in the midst of divorce and the realization that the weight of raising 4 kids now fell on her shoulders. She understands not only balance in life, but also balance in life’s darkest moments. George didn’t just find balance, she made it.

Caught in the middle of 4 kids’ schedules, George knew driving for a rideshare would give her the balance she needed. When she had a problem with the lack of women's influence in this sector, she created an alternative. The birth of Shebah allowed George to make space for women in startups and the tech industry. She’s a fierce competitor in a field where women are an afterthought.

George is changing the lives of over 1000 drivers, all of whom are women and all of whom now have flexibility, a solid income, and a collective purpose of female empowerment. She’s encouraging financial literacy by providing free consultations with experts to all Shebah drivers.

George is inspiring 90,000 female passengers to demand safety as a necessity, not just a nice-to-have. She’s quoted that “sitting with people who are a bit afraid of what they don’t understand is okay,” and she’s unafraid to do the work involved in getting women half the seats at the table - because one for the sake of ‘diversity’ just isn’t good enough.

George is engaging, professional, witty, and more than anything, she gets it. She knows that women aren’t a marker of diversity, but human experience is, and her extraordinary life is no exception. She’s a divorcée doula, a loving mother, a powerful role model, and an unapologetic woman with the unwavering courage to be comedic.

George’s Journey on the Road to Shebah

Starting a business as a single mum of four