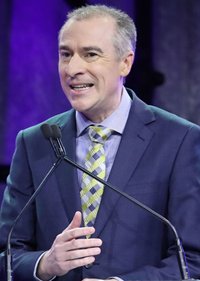 Combining authoritative journalism and sharp-eyed analysis with emotive broadcasting, Gerard Whateley is a unique voice in the coverage of sport in Australia. He'll bring all that and more to SEN mornings hosting his radio show Whateley.

Combining authoritative journalism and sharp-eyed analysis with emotive broadcasting, Gerard Whateley has established a unique voice in the coverage of sport in Australia.

He spearheads the Melbourne end of sport through events ranging from the Melbourne Cup to the Stawell Gift, the AFL season to the A-League and Australian Open Tennis to Australian Masters Golf.

In 2009, Gerard was honoured at the Australian Sports Commission Media Awards for the Best Contribution to the Coverage of Sport by an Individual, adding to numerous awards for his reporting and broadcasting of AFL and horse racing.

In 1999 came an approach from Channel Ten to take the job as the network's Senior Sport Reporter. At the completion of his first year he was named the Young Journalist of the Year at the Melbourne Press Club's prestigious Quill Awards.

Three years on he accepted the chief reporter's position at Seven News, winning the Quill Award for the Most Outstanding News Report for an investigation that revealed a wanted US criminal had lied to enter Australia to win a Melbourne radio station's Valentine's Day competition.

Soon after, Ten reclaimed Gerard's services to be a foundation member of the network's AFL commentary team. At the same time he joined ABC Radio’s AFL team and in his inaugural year calling football was named the Australian Football Media Association's Most Outstanding Radio Caller, following in the footsteps of Tim Lane, a feat repeated in 2009.

Having been a regular voice on the national broadcaster for a couple of years, Gerard joined the ABC full-time in September 2004 to fulfil a childhood dream of broadcasting a wide variety of sports.

Adding race calling to his repertoire, Gerard became the seventh man to call the Melbourne Cup for the ABC dating back to 1925. His inaugural Cup was Bart Cummings’ 12th when Viewed saluted in the tightest finish in the history of the race.