Print
With a sporting background in polo and Aussie Rules, Gillon McLachlan is the most powerful man in the AFL being appointed as the CEO. 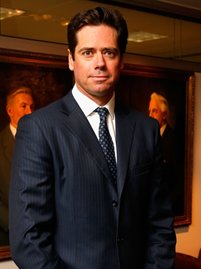 Gillon McLachlan is the Chief Executive Officer of the Australian Football League.


He has worked for the AFL since 2000, initially as a consultant in strategic planning and in November, 2003, was appointed General Manager, Commercial Operations.

He subsequently assumed additional responsibilities for broadcasting and major projects in 2006 and in 2008, was appointed Chief Operating Officer in 2008 with responsibility for AFL broadcasting, digital media, fixturing, venue agreements and stadia infrastructure.

He and his wife Laura have 3 children.