Glen Jakovich is one of Western Australia’s highest profile AFL players and sporting identities. Mix his strong playing presence with his impressive communication skills, and you have the makings of an excellent guest speaker. 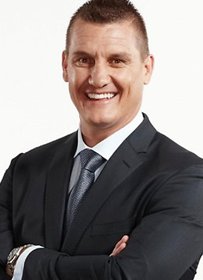 Possibly the best speaker we have used. Engaged the audience and conveyed a number of great messages for SME’s.

Glen's insight into his AFL background was intriguing and very informative but his ability to add some light hearted 'moments' really showed his personable side, which I think all who attended, enjoyed immensely.

On a personal note Glen was my guests for the day and an absolute pleasure to play golf with (can't putt) and to have as a guest speaker just topped the day off; I have no hesitation at all in recommending Glen Jakovich as a guest speaker as he is a true professional and most of all ‘good bloke’.

Glen gave a good talk for 40 minutes which kept the gathering pretty well enthralled and listening. It was great to see him arrive early and get involved with meeting the customers he also stayed after the event and mixed in well with the crowd. Overall he was great addition to the night as we were launching a new fencing profile to fencing contractors, which can sometimes not be the most interesting product. The addition of Glen allowed us to mix the event up and keep the customers well entertained whilst they enjoyed a few drinks.

Comments from the audience on the day included "inspiring", "fantastic", "really good speaker, good fun", "a hero, love him", "a terrific Speaker, uplifting and thought provoking", "great story, Very entertaining" and "really enjoyed hearing his story; it made me think about me and my leadership".

Glen Jakovich travels from WA
Fee Range: Up to $5000

Jako is a much loved icon in West Australian sporting circles. His grim-faced determination and muscular physique are etched into the memories of all who lived through the rise and rise of the West Coast Eagles.

Following a magnificent on-field career, his work as a Fox Sports Presenter and as a Football Analyst for 96fm and 6PR has kept him firmly in the public eye. He is a champion, a public figure and now an experienced media personality. Those who’ve worked with him in business have seen first-hand the power of commitment and professionalism.

Glen was named West Coast Eagles Club Best & Fairest Player in 1993, 1994, 1995 and 2000. He was chosen as an All Australian player in 1994 and 1995. His 1996 season was severely hampered by a knee reconstruction in round 12 and if he had remained uninjured his career would have reached even greater heights.

Since retiring from competitive football Glen has carved out a new career in media and is a regular AFL commentator for Radio 6PR Perth and Channel Ten nationally.  He is also a regular panel member of Radio 6PR’s daily Sports Central program.  He is also a much sought after speaker for corporate, government and sporting events.

After suffering a major injury in the workplace and enduring eight months of rehabilitation to return to work, he intrinsically understands the importance of safe work practices. For ten years Glen was an ambassador for Worksafe through their Thinksafe campaign, earning him the moniker “Glen Worksafe Jako”. Independent market research found Jakovich “a credible spokesperson”. He featured in television advertisements, hosted events, campaign launches and safety forums. He visited over 200 primary schools and is described by the Director-General of WorkSafe as an engaging speaker who adapted his presentations to suit the target audience and was always well received.

He continues his involvement with Worksafe, focusing on young apprentice safety and inspiring responsibility and awareness. Glen is well received as a departure from the usual safety spokespersons and his easygoing nature and sense of humour means he relates well to all audiences.


Glen Jakovich is one of Western Australia’s highest profile AFL players and sporting identities. Mix his strong playing presence with his impressive communication skills, and you have the makings of an excellent guest speaker.