Glenn Robbins , a graduate of Drama and Media at Melbourne State College, first moved into performing in 1981. As a stand-up comedian, he enjoyed performing at popular comedy venues in Melbourne and Sydney. Audiences warmed to his naturally dry... 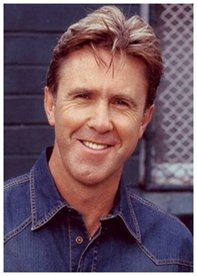 Glenn Robbins , a graduate of Drama and Media at Melbourne State College, first moved into performing in 1981. As a stand-up comedian, he enjoyed performing at popular comedy venues in Melbourne and Sydney. Audiences warmed to his naturally dry sense of humour and style.

The move into television was a natural progression for Glenn Robbins. He became well-known as a performer/writer for a number of television's top rating comedy sketch shows including: 'THE COMEDY COMPANY' (Network Ten), 'FAST FORWARD', 'FULL FRONTAL' and 'JIMEOIN' (all 7 Network). While he performed a good many characters throughout these shows, Glenn's most prominent and notable would be that of Uncle Arthur .
A regular guest on channel 7's top rating 'TONIGHT LIVE', Glenn Robbins often appeared, from various locations around the country, presenting his live Talk Cams.
In 1996, Glenn enjoyed a successful season of live performances of 'The Cooking Show' at The Edinburgh Festival, once again teaming up with fellow comedians Jimeoin and Bob Franklin.
A regular member of the Working Dog production team, Glenn appeared on (Network Ten) " THE PANEL" from 1998-2004. With Working Dog , Glenn also created the outback adventure parody "ALL AUSSIES ADVENTURES" with Russell Coight , series 1 and 2 (also Network Ten). In the very popular “THANK GOD YOU’RE HERE” series, Glenn has the dual role of Creative Consultant as well as having performed in a couple of episodes.
IN 2001, Glenn played the role of Pete Morrison in the much-acclaimed Australian feature film, "LANTANA". This AFI award winning film, directed by Ray Lawrence, has seen both local and international success.
2002 saw Glenn Robbins, a.k.a. Kel Knight, alongside Jane Turner and Gina Riley, in the AFI award winning comedy series “KATH & KIM” (ABC TV). So enormously successful is Kath & Kim, that a further 2nd and 3rd series were produced for TV during 2003/2004 and, as it gathered international recognition, particularly in Britain and USA, a Kath & Kim tele-movie was produced for broadcast in 2006.
That same year, Glenn Robbins played the leading role of Benny G in Molloy Boys’ feature film, “BOYTOWN” – the story of a successful 80s boy band who decide to reform in the hope of recapturing some of their former glory.