Print
Scottish by birth, Gordon was brought up in Stratford-upon-Avon, England, from the age of five. With an injury prematurely cutting short a promising career in professional football with the Glasgow Rangers, he went back to college to complete a... 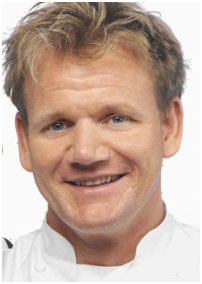 Scottish by birth, Gordon was brought up in Stratford-upon-Avon, England, from the age of five. With an injury prematurely cutting short a promising career in professional football with the Glasgow Rangers, he went back to college to complete a course in hotel management.
Gordon Ramsay’s first years in the kitchen were spent training under culinary luminaries such as Marco Pierre White and Albert Roux in London, after which he moved to France where he worked in the kitchens of Guy Savoy and Joël Robuchon for three years where he was able to enhance his expertise in classic French cooking. In 1993, Gordon became chef of the newly opened Aubergine, within three years the restaurant was awarded two Michelin stars.
Gordon's first book, Passion for Flavour, was published in 1996. A number of hugely successful books have since followed including: Passion for Seafood (1999); A Chef for all Seasons (2000); Just Desserts (2001); Gordon Ramsay Makes it Easy (2005); Gordon Ramsay’s Sunday Lunch (2006); Gordon Ramsay’s Fast Food (2007) and Gordon Ramsay’s Healthy Appetite (2008). His most recent recipe book, Gordon’s Ramsay’s Cooking for Friends is published by HarperCollins this September.
In 1998 at the age of 31, Gordon set up his first wholly owned restaurant, Gordon Ramsay, in Chelsea. On 19th January 2001 it won its third Michelin star. It has since undergone a major refurbishment and this year celebrates its tenth anniversary. In October 2001 Gordon opened Gordon Ramsay at Claridge's which won a Michelin star in 2003. The same year saw the opening of Gordon Ramsay Holdings first international restaurant, Verre by Gordon Ramsay, located in the Dubai Hilton Creek Hotel. A year later he opened Pétrus in St. James's. Within seven months it had won a Michelin star. The restaurant relocated to The Berkeley Hotel in 2003 and won its second Michelin star in January 2007.
In 2001 ‘The Gordon Ramsay Scholar Award’ was set up to recognise talented young cooks working in catering or studying at catering college. The competition has grown year on year and now takes place at The BBC Good Food Show.
May 2004 saw Gordon Ramsay star in the Channel 4 series Ramsay's Kitchen Nightmares, later to be awarded a BAFTA and an International Emmy. Shortly after this, Gordon was given two weeks to direct a group of celebrities towards Michelin standard cooking in the ITV series Hell's Kitchen. 2005 confirmed Gordon as one of the UK's major television stars. A second series of Ramsay's Kitchen Nightmares was followed by the debut of Channel 4's The F-Word, a high-octane food show with cooking, topical VT's, food campaigns and celebrity guests which remains one of Channel 4’s highest rating shows. The third series of US Hell’s Kitchen was named the top rated show of Summer 2007, a few months later, the American version of Kitchen Nightmares made its successful debut.
In October 2006 Gordon’s autobiography, Humble Pie was published by Harper Collins. The book, which details an honest account of his life in and out of the kitchen, has topped the best seller charts and has since been published in paperback.
In November 2006 Gordon made his stateside debut with the opening of Gordon Ramsay at The London in The London NYC Hotel, part of the LXR Luxury Resorts collection where Josh Emett, previously head chef at The Savoy Grill is the resident chef de cuisine. In July 2006 GRH opened La Noisette with chef patron Bjorn Van Der Horst, which won a Michelin star in January 2007. Now known as Sloane Street by Gordon Ramsay, the space now offers exclusive private dining for the group.
The fifth international Gordon Ramsay restaurant opened towards the end of the year at the Ritz Carlton Hotel Powerscourt, Ireland at the same time that Gordon launched maze restaurant at the Hilton Old Town in Prague. January 2008 saw the re-opening of Chelsea’s classic neighbourhood bistro, Foxtrot Oscar, on Royal Hospital Road, just a few doors away from Gordon’s eponymous restaurant.
Autumn 2008 saw the launch of two exciting projects for Gordon Ramsay protégé Angela Hartnett since her move from The Connaught. On August 21st Angela opened Murano, a fine-dining restaurant in the heart of London’s Mayfair. On 22nd September, York and Albany, located on the edge of London’s Regents Park, opened, comprised of a restaurant with bar, delicatessen and guest accommodation.
In December 2008 Gordon, in partnership with Brand Events, hosted Gordon Ramsay Presents Taste of Christmas in association with Gordon’s celebrating the best in Christmas food, drink and entertaining and was held at London’s ExCeL centre from 4th-7th December.
Subscribe
© 2022 Platinum Speakers