After Australia’s gruelling and dramatic penalty shoot out World Cup qualifying match against Peru Socceroos coach Graham Arnold's journey to this year's 2022 World Cup has been 40 years or more in the making as a player and coach. 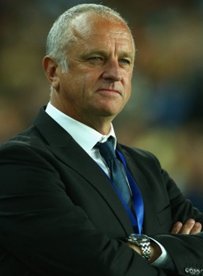 He started his playing career with junior leagues before joining Sydney club Canterbury Marrickville.  He later played for Sydney Croatia when it won NSW State League and was promoted to the NSL.

Arnold first won Australian selection in a friendly against Tasmania in 1985.

His 14-year senior career started against Red Star on July 31, 1985, when he scored in three successive games.

Arnold’s first 'A' international was against Chinese Taipei in the 1986 World Cup qualifiers in Adelaide, where he scored his first Socceroo goal.

In the late 1980s, Arnold moved overseas to play in Belgium, Japan and Holland where he became prominent with Roda JC (Holland) as a leading striker.

He returned to Australia in 1998 to join Northern Spirit in the National League as inaugural coach where he also played in 28 matches and scored five goals for an overall total of 225 NSL games and 72 goals.  Arnold played for Australia in 88 matches, including 56 A internationals and scored 33 goals, 19 at A level.

Graham's coaching career started in 1998, when he was appointed player/manager of the Northern Spirit FC.

In 2000 he went to work as assistant coach of the Australian national team where he supported them through the 2006 FIFA World Cup campaign. He continued in various national team capacities until 2010 when he assumed the role of manager at A-League club Central Coast Mariners, guiding them to two Premierships and a Championship.

In May 2014 Graham was appointed to manager of Sydney FC, winning two A-League Premierships, a Championship, and an FFA Cup.  In his time as an A-League coach, he won the Coach of the Year on three occasions.

After the 2018 FIFA World Cup in Russia, Arnold took over as head coach of the Socceroos and U-23's.

After Australia’s grueling and dramatic penalty shoot out World Cup qualifying match against Peru Arnold's journey to this year's 2022 World Cup has been 40 years or more in the making as a player and coach.

The Group Stage qualifying matches for Qatar 22 begin in November for the Socceroos.