Graham Cornes OAM has spent a lifetime in AFL football as a successful player and coach, culminating in his admission to the Australian Football Hall of Fame in 2012. He played 390 games with Glenelg, South Adelaide, North Melbourne and South Australia.  His presentation discusses the principles of leadership, motivation and inspiration, and he shares the three most important components of achievement and success. 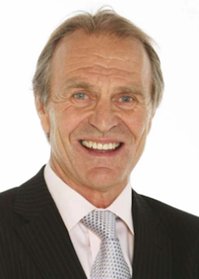 Excellent, amazing, brilliant and awesome was some of the feedback from the people who attended the evening re Graham’s speech and the band. Graham approached the topic of mental health to footballer’s, veterans and the general community in a sensitive and calm manner. You could not hear a pin drop during the speech which is very unusual for football club rooms....

Graham did a fantastic job speaking at our fundraising dinner, we had great feedback from all of our guests. His talk was very relevant to the cause that we were fundraising for and he engaged extremely well with the crowd. He was the highlight of the night!

An absolute gentleman and generous with his time after the show, happily talking to guests

Excellent - Graham was a confident and eloquent speaker who engaged with our audience at a personal level - he included everyone in his stories and kept the audience interested throughout.

Graham fitted into the panel really well and contributed to the morning's Work-life Balance in a Modern World session and provided the audience an opportunity to hear first hand how he balances his own busy career demands with family life.

The presentation drew upon the speaker's experiences external to the RAAF, whilst still maintaining relevance to RAAF values.

Graham is a strong speaker who is confident and at ease in front of a large audience.

Graham Cornes OAM travels from SA
Fee Range: Up to $5000

Graham Cornes OAM has spent a lifetime in AFL football as a successful player and coach, culminating in his admission to the Australian Football Hall of Fame in 2012.

He successfully coached Glenelg, South Adelaide and the South Australian state side, and was selected four times in the All-Australian team: twice a player, and twice as coach. A parochial South Australian, he has been this state’s most successful State of Origin coach, and has received the Medal of the Order of Australia, for his services to football.

He was the inaugural coach of the Adelaide Football Club, when it was admitted to the AFLin 1990, a position he held for four years. His football career was balanced by a corporate career, in which he was the dealer principal of several successful automobile franchises.

For over 23 years he was a radio broadcaster, the last 18 years of which he co-hosted Australia’s most successful sport, talk radio programme on FIVE aa. It consistently rated number one in the Adelaide market, beating even the most popular syndicated national programmes. Whilst now not working full-time he has a “Conversations” programme which airs in prime time between 12.00 and 1.00pm daily.

Having been drafted under the National Service Act he also served two years in the Australian Army, which included a tour of duty as an infantry soldier in South Vietnam in 1970.

His presentation discusses the principles of leadership, motivation and inspiration, and he shares the three most important components of achievement and success.

Supported by an appropriate visual display (if required) and interspersed with anecdotes both serious and amusing, his presentations are always extremely well received.