Print
Greg Champion is part humourist, part folkie, half hippy, half bogan, part Victorian and completely South Australian. A prominent radio personality and corporate and community entertainer, Greg is recognised in Australia and abroad for his... 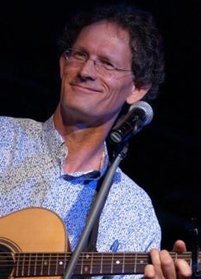 You appropriately composed ‘footy’ songs and the ready involvement of your audience proved to be a highlight, not only of the day, but of the season.  So many appreciate words have been received that we long to have you back.

It was a pleasure to work with you. We received a lot of positive feedback about the entertainment provided by you.  We look forward to working with you in the future.

Greg was excellent. He was certainly the right choice for the audience and they were yelling for more. I would have no hesitation in requesting Greg again. In addition, he was excellent in the lead up to the event and prior to going on stage.

Excellent. Very funny and highly entertaining. The audience loved him!

Greg was a delight – audience loved him; interacted well with him and several people commented afterwards how good he was. Would definitely use him again.

Greg Champion was a great performer and gave an hilarious performance. Even those who didn’t follow sport enjoyed his songs and antics.

Greg Champion travels from VIC
Fee Range: Up to $5000

Champs drifted into radio in 1983 on a fledgling public radio program, The Coodabeen Champions.  He’s now been a member of the institutional Coodabeens on ABC radio for thirty years, developing and sharing his particular brand of Aussie songs along the way.

He has performed at such prominent events as three AFL Grand Finals, two Adelaide Grand Finals, two One-Day Cricket Finals and at countless functions at the Melbourne Cricket Ground (MCG). Greg’s national and international commitments have taken him as far as New Zealand, Nashville, France and Fiji and his passion for everything Australiana has led to performances in Weipa, Flinders Island, Keppel Island, Katherine, Ceduna, Broken Hill and Upper Kumbuckna.

As a radio personality, he has been a member of the Coodabeen Champions since 1983 – a radio team which has become an institution on ABC and commercial radio. As a public figure, Champs is invited to compere/host a number of key charity and community events each year.

He has extended his work into the field of songwriting and writing, having published two books on the Thoughts Of Guru Bob [Penguin/ABC], two Christmas songbooks with Colin Buchanan [Scholastic] and, with his radio team, two Coodabeen Champions humour books with Penguin. Greg is now also an Ambassador for the White Ribbon Foundation, Australia.

Greg sings funny songs, often about football, cricket and Australian topics. It's not all sport: all aspects of Australian life are targeted. If a company or club wants to 'roast' their own personnel, they provide Greg with 'dirt & gossip', which he then embellishes, without revealing sources.