Print
One of the characters of the game, and affectionately known as “Fat Cat”, the burly Ritchie developed into a first class batsman who possessed wonderful timing when in full, glorious flow. Greg Ritchie is virtually a one-stop shop in after dinner speaking perfect for light entertainment and sportsman's nights. 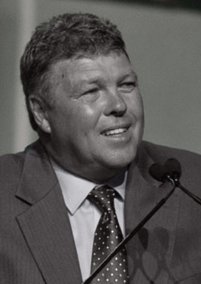 “Fantastic”. Greg’s speech had every one laughing so much we were crying, he is a very diverse speaker and very funny, his cricketing background appealed to us as we are a local cricket club but any organisation or person engaging Greg as a speaker will NOT be disappointed he is that good.

For about one hour he had the whole audience  captivated with his speech, our audience was a very diverse audience ranging from 16 year Old’s to 80 year Old’s both men and women who all enjoyed the nights entertainment, thank you so much Greg.

“Excellent.  Greg spoke extremely well, he engaged his audience right from the start, he was very funny and held a diverse and discerning audience captivated for nearly an hour. Positive comments from all parts of the audience. We all very appreciative of Greg's speaking on the evening. We gained a great deal of credibility by engaging such a well regarded and received speaker, Greg was a significant drawcard for a good proportion of the people attending and no one was disappointed.”

It was truly a privilege to witness first hand, former Test Cricketer and raconteur, Greg Ritchie, regale his collection of humorous stories as guest speaker at the HPCC's Annual Fundraising Dinner recently. Although Greg's material truly resonated with our mainly cricketing audience, I wouldn't hesitate to recommend him to any group, including corporate, who is looking for a professional and highly entertaining one of a kind speaker.

One of the characters of the game, and affectionately known as “Fat Cat”, the burly Ritchie developed into a first class batsman who possessed wonderful timing when in full, glorious flow. Greg Ritchie is virtually a one-stop shop in after dinner speaking.

A motivator capable of inspiring corporate clients he is a most humorous raconteur. Greg is possibly as good a speaker as he was a cricketer and has the ability to hold a diverse and discerning audience captivated for as long as required. He can MC an evening, act as auctioneer and his comedic anecdotal cricket stories see him regarded these days as one of Australia’s best after dinner speakers.

Greg Ritchie started his test career for Australia in Pakistan in 1982 becoming the only Australian to score three centuries in the series, only to be dropped from the team for the Ashes series against England a few months later. Back with in the Ashes team in 1985 he went on to play 30 Tests, scoring a total of 1690 runs including three centuries and seven half centuries. In the year 2000 he was named as one of the seven greatest Sheffield Shield run scorers in Queensland’s history for amassing over 6000 runs for his state during his 10 year career.

Since retiring in 1986, Ritchie has had a continuous media career that has included time with the Channel Nine commentary team and Triple M Brisbane’s breakfast show. Just like his cricket where it is said he “developed into a first class cricketer who possessed wonderful timing when in full, glorious flow” Greg Richie is a first class entertainer who posses “wonderful timing and a full glorious flow when it comes to story telling”.

With a high international profile, Greg offers knowledge, charisma and professionalism gained from years as an elite sportsman, news breaker (and maker) and television and radio presenter. With an almost encyclopedic knowledge of cricket, and a wealth of experience hosting events and award ceremonies and after dinner speaking, at home and overseas, he is certain to entertain and maybe even inspire audiences from all walks of life…cricket lovers or not.

Greg’s expertise and talents include: