Greg Sullivan is an award-winning stand-up comedian, writer and broadcaster. Since beginning his comedic career in 1995 he has performed at the famous Improv in Los Angeles, appeared on numerous TV shows and embodied a vast range of roles for Triple M Brisbane, spanning an incredible 14 years. 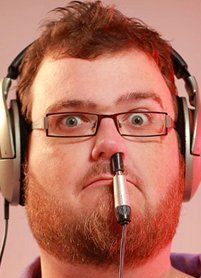 The Brisbane Advertising Association engaged the services of Greg Sullivan on a number of occasions as entertainment for our lunches. Greg was brilliant! Not only was he outstandingly hilarious, keeping our patrons in stitches, but he managed to keep what is a very raucous crowd under control and concentrating. We always had extremely positive feedback about Greg's performance and many attendees claimed they would be happy seeing him at every lunch.

I have absolutely no hesitation in recommending Greg for any kind of performance as he always delivered on and exceeded our expectations. Yes he's funny but he's also very professional and takes the time to understand the audience he's presenting to - which for us was definitely important.

Not only is Greg Sullivan a first-rate stand-up comedian, he is also extremely reliable and professional person. I admire this man's extraordinary ability to entertain and charm the masses, which was evident throughout his illustrious 14 year radio career with triple M Brisbane.

In his time with the network, "Sully" was able to launch his on-air career through his clever writing skills and unwavering work ethic. There is no doubt in my mind that this man was born to make people laugh and I believe he is a valuable addition to any workplace.

Greg (Sully) Sullivan travels from QLD
Fee Range: Up to $5000

Greg Sullivan is an award-winning stand-up comedian, writer and broadcaster. Since beginning his comedic career in 1995 he has performed at the famous Improv in Los Angeles, appeared on numerous TV shows and embodied a vast range of roles for Triple M Brisbane, spanning an incredible 14 years.

Greg Sullivan has performed on television, radio, in theatres, overseas, to corporate bigwigs and to smalls groups of disinterested tradesmen whilst standing on the back of a ute. He has written material for Rich Hall (The Simpsons, Saturday Night Live) which was used in his Edinburgh Comedy Festival show. He has also written columns for Bean Scene Magazine and jokes for the NRL Footy Show. As you can see, he'll pretty much do anything for money.

He has been invited to the world famous Improv Comedy Club in Los Angeles, performed at major festivals such as the Melbourne International Comedy Festival and the Sydney Comedy Festival Gala and has appeared, in a variety of roles, on television shows such as Good News Week, Home Delivered Humour, O'Loghlin on Saturday Night, The Today Show and A Current Affair.

Despite not concentrating his efforts on corporate performance due to his demanding radio schedule over the last fourteen years Greg has still provided his services for many businesses and associations.

He has performed for Hewlett Packard and Data Three, where he learnt that computer types really do laugh out loud, but the man rolling on the floor was choking on a prawn. He's a country boy and so was perfect for Elders, where he opened with a storm of laughter, and provided the vital follow up jokes to ensure he reaped a hearty crop of prime hard laughter.

He has performed at the Australian and New Zealand THEMS conference of mental health workers and consumers, at the Australian Society of Cognitive and Behavioral Therapists and at the Royal Brisbane Hospital's depression awareness fund raiser the One in Four Ball. In fact he has been so popular with mental health professionals he suspects someone was taking notes for a thesis during his performances.

He has performed for Ray White real estate in the Whitsundays and for Go Gecko at Seaworld Nara Resort....where he learnt that when it comes to awards nights real estate types are all about location.

He has even done government work, debating a bunch of Southerners including Charlie Pickering and Claire Hooper on the behalf of the Queensland state government - sadly the payment didn't come in a brown paper bag.

Greg understands many businesses are struggling in the current two speed economy so he has a special two speed fee structure where he'll perform half price for any business wherein the boss took home less money than they did in the last financial year.


Greg also share’s his story of living with depression which he has overcome through time. His wife Krista Fuller has written a book about suicide prevention called “The Outsider’s Inn”.