Print
As the host of most of Channel Seven's major sports shows Hamish McLachlan is in strong demand as a clever and amusing master of ceremonies as he ensures the message you want to have told is done so in a way that is clear, succinct and resonates. 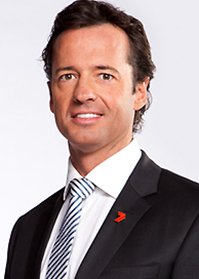 Hamish McLachlan grew up on a sheep farm in South Australia. He is one of four sons who spent the majority of their youth playing and thinking about sport. Hamish has always marvelled at how sport transcends all boundaries and delivers so much happiness and joy to so many, and making a life within it was always his goal.

He idolised Michael Aish, John Fitzgerald and Ayrton Senna. He thought he would win a Premiership, or hold the Wimbledon trophy aloft. He cried when Australia II won the Americas Cup, and the first Cup winner he remembers is Just a Dash.

Once the reality of not having the correct DNA to be a world champion at anything set in, Hamish settled on being involved in the worlds best sporting events through the broadcasting and management of them.

The journey started with 7 years at Elite Sports Properties, where he worked in the Events and Entertainment Division – getting a granular understanding of the athletes, codes, broadcasters and sponsors. Here he was asked to host live events, and this, coupled with calling live sport on the weekend at local amateur clubs he was a member of, gave him a taste of the future.

Knowing he needed to do some flying hours ‘off broadway’, Hamish spent 3 summers in Europe hosting and calling horse events in order to develop his skills behind the microphone. Once back in Australia in 2008, he caught a break with Channel 7, and first appeared on television as host of “AFL Game Day” – a Sunday morning football program that still runs today.

Following a year on 7, radio station Triple M approached Hamish and since 2008, he has been enjoying mixing television and radio, calling and hosting football, tennis and horse racing. Hamish was asked to become involved in the hosting of the Spring Racing broadcast and calling tennis matches for the World Feed Broadcast of the Australian Open with Channel 7.

Triple M also approached Hamish to host their Spring Racing coverage in 2008. Based on the Spring Racing coverage’s success for which it won an award, Hamish was offered a role calling Saturday night and Sunday afternoon AFL matches for the station alongside Coleman and Brownlow medalists.

“The difference between a good event, and one that you will remember long after it is gone, is often the host.” Whether it’s a lunch with a former Prime Minister for forty, a 60 second half time chat with a five year old on national television, or a post Grand Final Concert for 20,000 being broadcast around the country, you need a host that understands the brief and can deliver.

Hamish is in strong demand as a clever and amusing master of ceremonies as he ensures the message you want to have told is done so in a way that is clear, succinct and resonates.