Print
John Howard is a visionary leader who believes that national strength abroad begins at home, John Howard provides a vision for the economic future and a look at global leadership in turbulent times. 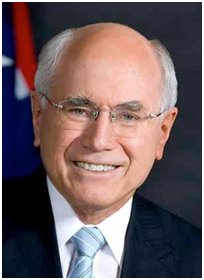 The Honourable John Winston Howard served as the 25th prime minister of Australia from March 1996 until November 2007. He has been Australia’s second longest serving prime minister. Howard led the center/right Liberal Party of Australia for a total of 16 years.

He was a member of the House of Representatives for 33 years. Prior to becoming prime minister, Howard had extensive senior experience in both government and opposition. He served as treasurer (finance minister) in a previous government and led his party in opposition for a number of years.

The Howard government undertook major reform of the Australian taxation system, through the introduction of a goods and services tax, accompanied by reductions in personal income tax and corporate tax rates. He also substantially reformed Australia’s labour laws delivering a freer and less regulated labour market. Australia’s unemployment rate had fallen to 3.9%, a 33 year low, by the time Howard left office.

In the field of foreign policy Australia, under Howard’s government, was both a strong and close ally of the United States as well as expanding links with Asian nations. A particular feature of the Howard government’s time in power was the development of the relationship with China, which is now Australia’s largest export market. Under Howard’s leadership Australian forces joined the coalition of the willing in Iraq in March 2003. Australia strongly supported the war against terrorism with her forces continuing to serve alongside American and other coalition forces in Afghanistan. Defense spending under the Howard government grew strongly, by some 47% in real terms between 1996 and 2007.

Howard was in Washington on an official visit at the time of the terrorist attack on September 11, 2001. He addressed a joint sitting of Congress in 2002. He currently serves as chairman of the International Democratic Union—an international grouping of center/right parties including the Republican Party.

His government undertook major reforms in social policy including measures to move people from welfare payments into paid work, the involvement of faith based and other non-government organizations in the provision of certain welfare services and a strengthening of Australia’s universal Medicare system.

Shortly after Howard came to power he responded to the massacre of 35 people by a lone gunman, at Port Arthur in Tasmania, with the implementation of national gun control laws which drastically curtailed the possession of many firearms.

Howard was born in Sydney, Australia on July 26, 1939, attending school at Earlwood Primary and Canterbury Boys’ High. He went on to the University of Sydney, graduated with a bachelor of laws in 1961 and was admitted as a solicitor of the NSW Supreme Court in July 1962. Prior to his election to Parliament, he was a partner in a Sydney firm of solicitors.

Howard is a keen follower of sports, particularly cricket and rugby. He plays golf regularly. Howard married his wife Janette, a teacher by profession, on April 4, 1971. They have three children, Melanie, Tim and Richard. Howard and his wife currently live in Sydney.

On June 9, 2008 Mr Howard was appointed a companion in the General Division of the Order of Australia.

On January 13, 2009 he was awarded the Presidential Medal of Freedom by President George W. Bush in Washington. It is America’s highest civilian honour.

On the January 1, 2012 Queen Elizabeth II appointed him as a member of the Order of Merit.

Howard’s autobiography Lazarus Rising was published in October 2010. It has become the best-selling political memoir in Australian history.

As prime minister of Australia for four terms, John Howard provided a global approach to leadership. He delivered economic vision and strategies for international security that raised Australia’s profile on the world stage while gaining the respect and gratitude of the world. Howard discusses the role of world leaders in a new century, detailing steps for handling the growing concerns of globalisation and global economics, the environment, and threats to international security.

A leader of tremendous courage and character, Howard understands that security at home requires vigilance abroad. Under his leadership, Australia was a consistent and resolute ally in the War on Terror. Howard discusses the need to build stability in less-fortunate countries, maintain strong international relationships with allies and manage immigration as key factors in strengthening security.


China and the Global Economy

Under Howard's leadership, Australia's economy grew every year, even during the Asian financial crisis that devastated its neighbours. His administration pushed for unprecedented expansion in Australia’s economic relationship with China by initiating negotiations for a free trade agreement with China. Howard candidly describes why he forged ahead with these efforts and what the economic future - for both the Pacific Rim and the world - may hold.


Leadership in the New Century

Steering the ship of what is the most prominent Western stronghold in the Asian-Pacific Rim requires visionary and forward-thinking leadership. Australian Prime Minister John Howard approached his responsibilities to his country from a uniquely global viewpoint, providing economic vision and security strategies that raised Australia's profile and impact around the world. Howard discusses the role of world leaders in a new century, detailing steps for handling the growing concerns of globalisation and global economics, the environment, and threats to international security.

Providing economic leadership in today's world means re-envisioning old economic models to discover new ones. Prime Minister John Howard did precisely that, and so much more, for Australia: in the face of criticism from many, Howard initiated efforts to broker a free-trade agreement with China, a strategic move that was completely unprecedented and, when ratified, will add further credibility to China's willingness to participate in a free market. Howard candidly discusses his vision for the global economic future, and in what ways, and to what degrees, China, India and the Pacific Rim will participate.