Julia Gillard was sworn in as the 27th Prime Minister of Australia on 24 June 2010 and served in that office until June 2013.  As Prime Minister and in her previous role as Deputy Prime Minister, Ms Gillard was central to the successful management of Australia’s economy, the 12th biggest economy in the world, during the Global Financial Crisis and as Australia positioned to seize the benefits of Asia’s rise. 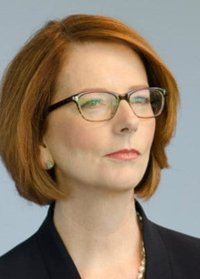 Yes, she was fantastic and wonderfully well received! With 432 completed surveys at this point: 90% Excellent. We’ve been surveying our subscribers for the last eight seasons and these numbers tie her with our second most popular speaker during that time, which is spectacular. We will probably get another hundred or so completed surveys. When it’s all said and done, she could possibly even bump our number one slot. She was great to work with. I have absolutely zero criticism (constructive or otherwise) to provide, and that’s a rare thing. The bar is very high here at The Richmond Forum, and she just sailed right over with ease. If I could book her five times for next season, I would. Also, she did her homework on the Model UN and prepared custom remarks for those student delegates. That care did not go unnoticed by the students. Great, great, great!

The lecture went very well and Prime Minister Gillard was like a star that evening. She was very confident, steady and answered very frankly and excellently all the questions from Tim and the audience. We have very good feedback from the audience that they have enjoyed the lecture. Besides the lecture, she was very personable, pleasant, gracious and joyful to be with.

I cannot express how important and successful your talk before the Boston College student body turned out. What was particularly notable was your availability to the students. It was good that you did that. You brought out the best in them. Their questions were thoughtful and relevant, but your responses were equally so. It is often that people in the political sphere leave audiences with a political message. You discussed the issues objectively and they appreciated that.

Julia Gillard [was] fantastic! The audience had such positive feedback about [her] session... I hope we can work together again in the near future, it was a great experience for me!

PM Gillard was absolutely WONDERFUL! She was so personable and insightful and everyone enjoyed hearing her experiences and reflections at both lectures. Her morning lecture was well attended, approximately 450 people that I counted, and there were a large number of students there, which always pleases us ... The evening dinner and keynote address also went splendidly and much of the conversation focused on education. She happily fielded questions until my director was forced to wind it up. I just cannot say enough positive things about the event. We have brought many speakers in the past and it is always such a delight to bring someone who not only has an impressive career but also is down-to-earth and a pleasure to be around.

Julia Gillard was sworn in as the 27th Prime Minister of Australia on 24 June 2010 and served in that office until June 2013.

As Prime Minister and in her previous role as Deputy Prime Minister, Ms Gillard was central to the successful management of Australia’s economy, the 12th biggest economy in the world, during the Global Financial Crisis and as Australia positioned to seize the benefits of Asia’s rise.

Ms Gillard delivered nation-changing policies including reforming Australian education at every level from early childhood to university education, creating an emissions trading scheme, improving the provision and sustainability of health care, aged care and dental care, commencing the nation’s first ever national scheme to care for people with disabilities and restructuring the telecommunications sector as well as building the National Broadband Network.

Ms Gillard has represented Australia at the G20, including winning Australia’s right to host the 2014 meeting, the East Asia Summit, APEC, NATO-ISAF, and chaired CHOGM.

Under Ms Gillard’s leadership, Australia was elected to serve on the United Nations Security Council.

In October 2012, Ms Gillard received worldwide attention for her speech in Parliament on the treatment of women in professional and public life.

In February 2014, Ms Gillard was appointed chair of the Global Partnership for Education, a leading organisation dedicated to expanding access and quality education worldwide.

Ms Gillard also serves as Patron of Camfed, the Campaign for Female Education, which tackles poverty and inequality by supporting girls to go to school and succeed, and empowering young women to step up as leaders of change.

In April 2018, Ms Gillard was appointed Inaugural Chair of the Global Institute for Women’s Leadership at Kings College, London. Through research, practice and advocacy, GIWL will address women’s under-representation in leadership, and the way gender negatively impacts the valuation of women leaders.

Ms Gillard is a Distinguished Fellow with the Center for Universal Education at the Brookings Institution in Washington. Ms Gillard serves as an Honorary Professor at the University of Adelaide, and is Patron of the John Curtin Prime Ministerial Library in Perth, Western Australia.

Ms Gillard’s memoirs, My Story, were published by Random House in September 2014. The second edition of her book was published in July 2015.

On Australia Day 2017, Ms Gillard was honoured to be awarded a Companion of the Order of Australia.

Engagement in the Asian Century: The Opportunity of Our Lifetime

Leadership in the Asia Century: Opportunities Abroad, Lessons At Home