Mr Peter Costello is a Company Director and a Corporate Advisor with the boutique firm ECG Financial Pty Ltd which advises on mergers and acquisitions, foreign investment, competition and regulatory issues. Mr Costello was the longest serving Treasurer in Australia's history. 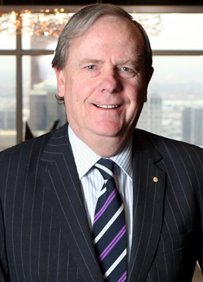 “Mr Costello did a fantastic Job, "he delivered a great message" in a way that customers could understand. Peter is a true professional in the way he interacted with our customers and staff, he gave them a great feeling of importance. CMV Truck and Bus felt comfortable with Mr Costello after meeting with him prior to our event, he gave me confidence to put our whole customer base in front of him."

“Excellent, Peter hit the mark perfectly - understood what the tone of the evening was and scoped his remarks accordingly".

“Excellent - As expected, Peter was engaging, educational and incredibly compelling to listen to. The perfect way to kick off our conference. Thank you".

From 1990 – 2009 Peter Costello AC served as a Member of the Australian House of Representatives and was Treasurer of the Commonwealth of Australia from March 1996 to December 2007.

He delivered twelve federal budgets including ten surpluses.  During this period Australia’s Sovereign Credit Rating was updated twice to its current AAA rating.

The path of politics is not easy; requiring a formidable personality to navigate its many challenges. Peter Costello is just that personality. His 1990 election as MP for Higgins evolved into Liberal Party Deputy Leader (1994), setting the scene for his 1996 transition to Federal Treasurer. It’s in this role Peter enacted his greatest achievements, guiding Australia through significant financial reform including the elimination of Commonwealth debt worth $96 billion; introduction of the GST and cutting income and company taxes, to name but a few. Peter’s best selling memoir recounts his illustrious national and international career and he today continues that contribution as Chairman of Australia's Future Fund.

Peter Costello practiced as a lawyer and Barrister for ten years before entering the Australian Parliament where he served over nineteen years.  From March 1996 to December 2007 he was Treasurer of the Commonwealth of Australia, a record term and the longest serving Treasurer in Australia’s history.

In January 2011 he was made a Companion (AC) in the Order of Australia.

During his time as Treasurer he:-

Reformed and modernised Corporations law under the CLERP program.

Established the Takeovers Panel to hear disputes over mergers and acquisitions.

Established the Future Fund currently holding around $70 billion in assets.

Established the Higher Education Endowment Fund as a perpetual fund for the Australian University sector with an initial contribution of $6 billion.

Mr Costello set up Australia’s system of financial regulation with the Australian Securities and Investments Commission and the Australian Prudential Regulatory Authority established in 1998 and the Financial Services Reform Act of 2001.  He introduced Australia’s monetary policy targets by agreement with the Reserve Bank of Australia.

For more than a decade Mr Costello was a Governor of the World Bank and the Asian Development Bank. He was also a member of the Committee of the International Monetary Fund.  He has been Chairman of the OECD Ministerial and the APEC Finance Ministers.  He was involved in the establishment of the G20 after the Asian Financial Crisis and was Global Chairman of the G20 in 2006.

In 2006, after Government debt was eliminated in net terms, Mr Costello initiated the Australian Future Fund.  From its original deposit, the Future Fund has grown to hold around $170 billion in assets.

Mr Costello has served on the IMF Committee, as a World Bank Governor and Chairman of the Global Group of 20 Finance Ministers & Central Bankers (G-20).

After leaving politics in 2009, Mr Costello joined a number of international and domestic boards and was chair of the Independent Advisory Board to the World Bank.

For corporate speaking enquiries contact Helene Greenham at Platinum Speakers on 1300 314 788 or Helene@platinumspeakers.com.au