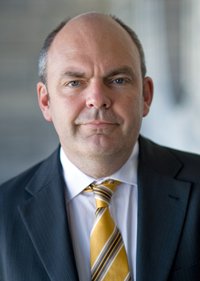 Steven Joyce has been one of the most senior ministers in the successful John Key-led National Government in New Zealand.

During a nine year political career he held the portfolios of Transport, ICT, Tertiary Education, Skills and Employment, Economic Development, Science and Innovation, and Infrastructure.  He was also associate Minister of Finance to Bill English for eight years, before becoming Minister of Finance in 2016 and delivering the New Zealand Government Budget in 2017.

As a lead economic minister and a core member of the government’s leadership team, Mr Joyce helped successfully manage the country through the Global Financial Crisis and the Canterbury earthquakes to the point where New Zealand became the third fastest growing economy in the OECD with the third highest employment rate as well.

During his time in government, Mr Joyce was the architect of a number of major government initiatives including New Zealand’s ultrafast broadband rollout, a comprehensive programme of microeconomic reform called the Business Growth Agenda, the electrification of Auckland commuter rail, a set of National Science Challenges, the government’s regional economic growth programme and New Zealand’s biggest highway building programme in decades.

Mr Joyce became the go-to Minister for dealing with many challenging issues that arose for the Key government.  He led the successful response to the sinking of the MV Rena, the remediation of the new Novopay teachers’ pay system, and the government response to the botulism scare that affected New Zealand’s largest company, Fonterra.

Prior to entering politics Mr Joyce was a successful radio entrepreneur.  He started with one radio station and built it into an NZX-listed nationwide radio business with four national radio networks, eighteen local radio stations, and 650 staff.  He is also a trained zoologist.

Mr Joyce’s strengths include finance, economics, marketing and communications.  He has an unwavering strategic focus, and believes strongly in clearly communicating with all stakeholders at every opportunity.

Steven recently retired from politics and is currently planning his return to the commercial world while re-charging on his lifestyle block north of Auckland, New Zealand with his young family, assorted ducks and Gemma the Retrodoodle.”

Steven shares 25 years successful leadership experience across a unique mix of senior commercial and government roles.  Working in governance and executive positions with boards of directors, ministers, external stakeholders and the public, and with budgets ranging from millions to tens of billions of dollars, he’s created the right environments to allow businesses to succeed internationally.

He has a strong strategic focus, working with others to create and deliver competitive strategies in a number of commercial and political settings, including restructuring and reorganising entities and building momentum to achieve the required results. His commercial experience partnered with agility in negotiating very complex legacy environments underpins his achievements in government and enabled him to enact change with both short and medium-term impacts – winning the confidence of stakeholders.

Steven believes strongly in communicating the vision regularly to all stakeholders and taking people with him. He designs organisational structures around achieving measurable outcomes, and works assiduously to remove roadblocks to enable people and teams to own and achieve the goals set for the organisation.

Leadership:  As a core member of the senior leadership team of the New Zealand Government I brought my commercial and change management experience to help successfully manage the country through the Global Financial Crisis and the Canterbury earthquakes, returning to fiscal surplus in 2014/15.  New Zealand became the third fastest growing economy in the OECD achieving annual growth of 3.5-4% from 2014 to 2017, and the country achieved its highest ever employment rate, also the third highest in the OECD.

Entrepreneurship:  Created start-up radio station Energy FM that grew in its initial five years to a turnover of $4 million per annum with EBITDA of 16%. Grew the company via organic growth and acquisition from $4 million revenue in 1994 to $60 million revenue in 2001, lifting EBITDA from 16% to 26% over the same period.

Change Management:   Led the major restructuring of the NZ National Party following its lowest ever election result, reorganising it to operate under a modern governance model and in a way suited to New Zealand’s MMP electoral system.  Became Campaign Director for the next five elections.  National’s Party Vote increased from 21% in 2002 to 39% in 2005, and then from 2008 onwards, to the four highest Party Vote results in New Zealand MMP history.

Governance:  Guided and supported the executive team of a Taranaki-based manufacturer/exporter from an engineering-led to a design-led firm using lean manufacturing processes, in the face of greatly increased international competition.  The company grew revenue and profit while the $NZ appreciated from $US 0.40-0.45 to $US0.75.

Steven can also tailor topics across areas including:

Public Communications in the age of social media/crisis management

Australasia’s place in the modern world