Hughesy ‘We Have an Issue’

Print
Join  Dave O’Neil and one other   of Melbourne’s funniest comedians and corporate entertainers for a laugh filled 30 minutes of problem solving. Based on  Dave’s television show  Hughesy We Have a Problem, guests can have their problems solved by Hughesy and his expert panel of problem solvers.  This is a funny and interactive Zoom session. 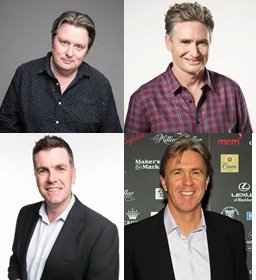 Testimonials for Hughesy ‘We Have an Issue’

Thanks for this afternoon's session. It was sensational, we all loved it.'

'Thanks for the show Dave, that was awesome! It absolutely went down a treat.'

‘Thanks for last night's Zoom show, lots of Awesome feedback!'

‘That was excellent, everyone loved it.’

‘Fantastic, Got a lot of positive feedback. Just what we needed at the moment.’

‘Thanks Dave, you went off! It was a pleasure working with you.’

“Just a quick note to thank you and Kitty for a fabulous show yesterday.  The response has been fantastic and you were able to make a whole lot of “miserable Melburnians” forgot lockdown for a while and enjoy a good laugh.

‘You’re a legend. Thank you. Very well received. You were on point. ‘

‘Thanks so much Dave, that was awesome.’

‘I’ve had nothing but great feedback regarding your performance and everyone had a really fun time.’

‘it was absolutely brilliant! And very very well received. The comments from staff so far have been very positive!’

‘Thanks Dave. It was great. We have gotten great feedback.

People really appreciated a laugh and a reason to smile/comb their hair/ see others.’

‘Thanks for this – everyone here absolutely loved it! We had great feedback and was exactly what we needed at the moment.’

Hughesy ‘We Have an Issue’'s Biography

Join Dave O’Neil and one other of Melbourne’s funniest comedians and corporate entertainers for a laugh filled 30 minutes of problem solving. Based Dave’s television show Hughesy We Have a Problem, guests can have their problems solved by Hughesy and his expert panel of problem solvers.  This is a funny and interactive Zoom session.

Dave has performed at 16 Melbourne International Comedy Festivals and at dozens of comedy clubs nationally. On screen you have seen him as a guest on Hughesy, We Have A Problem, The Yearly with Charlie Pickering, as Team Captain in the ABC TV comedy quiz show Tractor Monkeys, dishing out life advice in The Agony of the Mind, The Agony of Life, The Agony of Modern Manners, Can of Worms, plus messing about on Adam Hills In Gordon Street Tonight and Good News Week. He is probably most well-known for the honour of being the guest with the most appearances (over 50) on ABC TV’s ever-popular Spicks & Specks.

Often referred to as “a typical Aussie bloke”, Dave is an unusual success story. From working class roots, the university drop-out and former abattoir worker has risen to become one of Australia’s most popular and successful stand-up comedians. His honesty and laconic humour have led to several long-term hosting roles on television and radio. Dave is also the hottest comedy act touring nationally and internationally.

Des is an Australian comedian, actor, writer, and producer, best known for his work on Australian TV shows including The Wedge, Agony Uncles, Coxy's Big Break, Mark Loves Sharon, Kinne, Talk to the Animals and Manspace. He is also an experienced MC and Corporate comedian.

As a stand up comedian, Glenn enjoyed performing at popular comedy venues in both Melbourne and Sydney. Glenn was to move into television where he is well known as a performer/writer for a number of television's top rating comedy sketch shows including: Kath and Kim, Russell Coight's All Aussie Adventure, The Comedy Company, Fast Forward, Full Frontal and Jimeoin