Print
Ian Cover is a founding member of the ABC radio team’s The Coodabeen Champions who have been broadcasting their Aussie Rules program for over 30 years. An entertaining and professional MC, he has entertained and thrilled countless corporate, charity and sporting events. 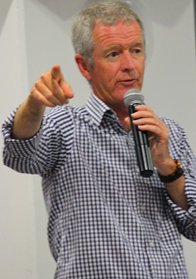 Ian is very easy to work with and does a brilliant job !  We've already booked him again for next year !!

Excellent - as always Ian has the wonderful ability to read his audience and MC accordingly.He always does a perfect job with great wit and humour

Ian was very entertaining and kept our audience laughing throughout the evening.  He was very flexible, easy to deal with and cleverly interacted with our other speaker Brendan McCartney  by presenting “interview style” questions to Brendan about the Geelong Football Club.

Ian made a real effort to understand and relate to the audience.  He personalized his performance to the group and made sure everything ran on-time.  An excellent MC.

We really enjoy having Ian Cover as our MC – he is very professional and handles the noisy crowd extremely well.

Ian Cover is a founding member of the ABC radio team’s The Coodabeen Champions who have been broadcasting their Aussie Rules program for over 30 years. An entertaining and professional MC, he has entertained and thrilled countless corporate, charity and sporting events.

As well as his role with the Coodabeens, Ian is renowned for his professional and entertaining work as an MC at corporate, charity and sporting events. His radio background assists him to get the best out of guests in interview situations while his experience in the media, sport and entertainment industries has provided Ian with a wealth of stories of his own which he can share with audiences as a guest/keynote speaker. His anecdotes and observations are delivered with his trademark bright and humorous style.

Ian has been the in-house MC with Cricket Victoria for over 20 years. He has played a key role in building the Lindsay Hassett Club, Melbourne’s best corporate sports lunch. Ian is in the 22nd year as resident compere of the Pivots Coterie at the Geelong Football Club, hosting many of the Cat’s major functions.

Starting as a cadet journalist with the Geelong Advertiser, after five years he later moved to Herald and Weekly Times as a business reporter. He has written for all the Melbourne papers and regularly writes columns for sporting magazines. Ian has written two books with the Coodabeens and a best seller with former Test cricketer Merv Hughes. He has also hosted breakfast radio with John Blackman on 3UZ and with John “Sam” Newman and Darren James on 3AW.

Ian’s career has also included television hosting duties on Optus-TV’s Footy Focus and is regular guest on Good Morning Australia with Bert Newton. An ambassador of sorts for his hometown Geelong, in 1996 he was elected Member for Geelong Province in Victorian Parliament. Following his 2002 election defeat he returned to media and public speaking.

Ian can liven events in tandem with his Coodabeens colleague: singer-guitarist Greg Champion. The duo have performed countless times with Ian as MC and then leaving the podium to join Greg in the odd number and encouraging audience participation.