Print
Ian Thorpe's inspirational journey has taken him, in less than 20 years, to the very pinnacle of achievement. His record as a swimmer is extraordinary enough, as a multiple world champion, and winner of 5 Olympic Gold Medals, but there is... 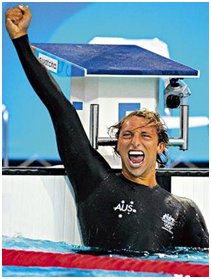 Ian Thorpe's inspirational journey has taken him, in less than 20 years, to the very pinnacle of achievement. His record as a swimmer is extraordinary enough, as a multiple world champion, and winner of 5 Olympic Gold Medals, but there is much more to this supreme athlete. As Young Australian of the Year he is a role model for all Australians, and his eloquence, intelligence and strength of character make him a spokesperson for his generation.


The 'Thorpedo' as he is affectionately known has won five Olympic gold medals, the most won by any Australian, and in 2001 he became the first person to win six gold medals in one World Championship.
Returning to the pool for the first time since 2006 for a bold comeback at the 2012 London Olympic Games and although breathing new life in the pool and clocking faster times, Thorpe was unfortunately unable to succeed at trials in March 2012.
In total, Thorpe has won eleven World Championship golds, the second-highest number of any swimmer. Thorpe was the first person to have been named World Swimmer of the Year four times by Swimming World Magazine, and was the Australian swimmer of the year from 1999 to 2003. His athletic achievements have made him one of Australia's most popular athletes, with his philanthropy and clean image earning him further recognition as the Young Australian of the Year in 2000.

This remarkable 26-year-old became a World Champion by winning the 400m freestyle at the 1998 World Swimming Championships in Perth. Since then he has dominated the middle-distance freestyle events, collecting the double at both the 1999 Pan Pacific Championships and the 1998 Commonwealth Games, and sweeping ten collective gold medals in 2002 at the Pan Pacifics in Yokohama and the Manchester Commonwealth Games. Most recently, at the World Championships in Barcelona, Ian won gold in both the 200m freestyle and the 4x200m relay. He has written his name into the record books, where it stands beside the 200m and 400m world records.

Winner of three Gold medals at the Sydney 2000 Olympics in the 400m freestyle as well as in the 4x100m and 4x200m freestyle relays, this unassuming young man is also a leader in the fight against drugs in sport and was named 2000 Young Australian of the Year. Ian, who at 14 was the fastest swimmer in history, has now won 16 National titles and has broken 13 long course world records and is testament to the power of determination and dedication.

After the 2004 Athens Olympics, Thorpe took a year away from swimming, scheduling a return for the 2006 Commonwealth Games. However, he was forced to withdraw due to illness and in November 2006 announced his retirement before attempting his comeback in 2011.
Subscribe
© 2022 Platinum Speakers