In April 2016, Jade became the youngest person in history to ski to the North Pole from anywhere outside the Last Degree. That year she was recognised by Australian Geographic Society as Young Adventurer of the Year.   Her journey was captured in a National Geographic documentary that aired in 170 countries. 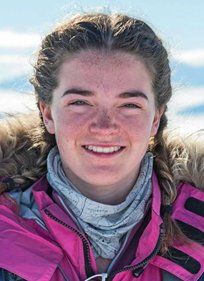 At only 16 years of age, Australian Jade Hameister became the youngest person in history to complete the ‘polar hat-trick’, traversing the North Pole in 2016, the Greenland crossing in 2017 and reaching the South Pole in 2018.

Jade now an 18 year old student from Melbourne, Australia loves being active and outdoors. At age 12, Jade completed the trek to Everest Base Camp and was inspired by the courage of two women she befriended on that trip – one who had previously skied to the South Pole solo and the other who had been the first woman to summit Everest without supplemental oxygen.

This inspiration led Jade to undertake her own quest…Jade's Polar Quest.

In April 2016, Jade became the youngest person in history to ski to the North Pole from anywhere outside the Last Degree. That year she was recognised by Australian Geographic Society as Young Adventurer of the Year.

Her journey was captured in a National Geographic documentary that aired in 170 countries.

She delivered a TEDx Talk in August 2016 and in early 2017 presented to a combined live audience of over 12,000 students at ImagiNATION in Melbourne, Sydney and Brisbane.

In June 2017, Jade made history again by completing the 550km traverse of the Greenland icecap unsupported and unassisted – the youngest woman ever to do so.

Her expeditions were captured as part of a National Geographic feature length documentary which is due for release mid-2018.

In the 2019 Queen’s Birthday Honours, Jade was awarded an Order of Australia Medal for service to Polar Exploration.

Jade is passionate about shifting the focus for young women from how they appear to the possibilities of what they can do and also about raising awareness about the impact of climate change on the Earth's beautiful and fragile polar regions.

#expandpossible - Instead of focussing on how young women look, Jade wants to shift the focus to what our bodies and minds can do and discover the incredible possibilities that we are capable of contributing to this world.

#bravenotperfect - Jade wants to encourage young people to choose bravery over perfection. Seeking perfection makes us fearful of making mistakes or looking silly. It places limits on us and instead we tend to play it safe, or worse… we don’t even try. Courage acknowledges that we are imperfect and that we will make mistakes, but we try anyway.

#climatechange - Jade has fallen in love with Earth’s beautiful polar regions. As a representative of her generation that will inherit the consequences of climate change, with unique first hand experience in these most fragile parts of our planet, she feels a responsibility to learn as much as she can about global warming and to play a much more active role in this area in years to come.

In life and in business, it is always more rewarding to focus on being brave rather than seeking perfection. When we choose bravery, we are prepared to try new things and we accept that failure and mistakes are just part of the process. When we make perfection the goal, who often don’t even try from fear of looking foolish. Jade shares this fundamental truth learned the hard way, through her epic polar journeys.

Who this is for:

Why this approach to life is so much more rewarding

Tools and tips for living life this way

Saving our Environment through Female Empowerment

The world is severely out of balance in so many ways, all of which can be traced back to the suppression of feminine power and gender inequality - when women’s status is reduced to being child bearers and men’s property it damages all of us, but this point of view is still present many cultures globally today.

Restoring this balance means giving young women around the world have access to education, programs and resources to grow in the directions of their dreams. By changing their future, we will change everyone’s future for the better.

The continuing exponential growth in the population of humans is the biggest threat to our environment. The most sensible way to address this issue is to educate and empower young women therefore allowing females to make their own decisions over the number of children they have and when.

Jade shares with us her unique perspectives on global warming shaped through her polar journeys and global travels.

Who this is for:

Founders, entrepreneurs, business leaders, teams, and anybody who wants to see a change for good

The long-term benefits of gender equality for everyone

A fresh perspective on the global warming debate.