Global magic sensation James Galea is known for his unique style of delivery and charisma, just two of the qualities which won him the award of 'Australia's Best Close-Up Magician' at the age of just 19. Breathing new life into the dying art of magic, James's dynamic performance is innovative and fresh in both delivery and content. 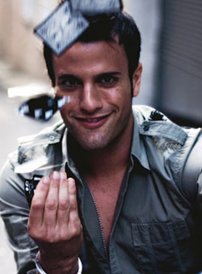 “I don't know how he does it, but James Galea blows my mind every time I see him. He's not like other magicians. He's not...creepy."
Ellen De Generes

“We wouldn't hesitate booking him again for another corporate event... 10 out of 10 from us!"
Callan Tenabel - Microsoft

James began his education in magic at the age of 14, learning from a man who he thought was a magician. James later found out his mentor moonlighted as a professional con man who cheated in high stakes poker games. While James's colleagues were learning how to make hankies disappear from old magic books, he learnt how to deal aces out of the bottom of the deck from a professional card shark.

It was in the field of close up magic that James' unique talent was discovered. His charismatic performances soon attracted notice and at just 19 years of age, James was awarded Australia's Best Close-Up Magician. His signature trick '673 King Street' has been included in TV's 50 Greatest Magic Tricks.

In 2009, after sell-out seasons Australia-wide of his live show 'I Hate Rabbits', James took to the stage as an actor starring in 'Lying Cheating Bastard', a play he co-wrote about Australian's most successful conman. The critics were unanimous in their praise for the play and Galea's performance.

Constant television and radio appearances (including 'The Ellen DeGeneres Show', 'Mornings with Kerri-Anne', 'Ellen's Somewhat Special Special', 'The Footy Show', '9am with David & Kim', 'NOVA', The Melbourne International Comedy Festival Gala, Edinburgh Festival) and his own series for the Nine Network ('Urban Magic') have seen James in constant demand not only in his home country but internationally both in the corporate arena and as a headliner world-wide, performing at the Flamingo Las Vegas and Hollywood's legendary Magic Castle.

James Galea is vastly different to the stereotypical 'pull a rabbit out of a hat' magician. Breathing new life into the dying art of magic, James trades the traditional rigid tuxedo and stiff top hat for a pair of sneakers, jeans and a t-shirt. Energetic and effortlessly cool, James presents the art of magic with a wicked sense of humour disarming audiences with his youthful charm and astonishing them with his talent.

An innovative and award-winning magician, writer, songwriter, director and producer, James Galea is in high demand in the corporate arena with worldwide clients including Microsoft, Virgin, Ford and Disney. Using large screens and a live HD video feed to ensure that every attendee (from 10 to 10,000) will have the best seat in the house, James guarantees to please everyone with his dynamic combination of comedy and magic.
Subscribe
© 2022 Platinum Speakers