Print
Jamila Rizvi is an author, presenter and political commentator. She is the Chief Creative Officer for the Nine Network's Future Women and hosts their digital events offering. Jamila writes regularly for The Sydney Morning Herald, The Age, The Good Weekend and Sunday Life. 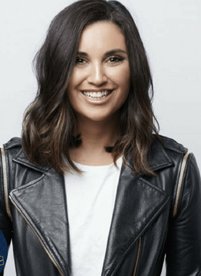 “It was an absolute pleasure to work with Jamila as emcee of our virtual conference. She brought humour and sincerity in equal measure, and was so calm and composed when the tech inevitably went wrong. We're grateful to have had the opportunity to work with Jamila and look forward to working together in the future. A superstar and 100% recommended.”

"If you want to start a movement you need someone with energy and warmth to get the ball rolling. You need someone who is genuine, intelligent  and kind. Jamila Rizvi takes the energy in the room, shape shifts it right along until you have an united community of leaders with fire in their belly. Jamila is a quite extraordinary and informed speaker."

“Jamila is an exceptional speaker. She has such a presence on the stage and speaks to content that is well ahead of the current conversation. I would go as far as to say that she is a gender equity futurist. You can hear a pin drop when she speaks and the feedback we have from delegates is always fantastic. She is unrelenting in her approach, it is no wonder she is one of our leading social commentators."

Jamila is one of the most impressive, articulate speakers and creative thinkers. She is warm, engaging and utterly at ease, whether it be interviewing Julia Gillard or talking vajazzling in Sydney Town Hall alongside Ruby Wax."

"Funny, inspiring, relevant - Jamila brought all these qualities to her role as MC. In fact she was so good, more than one attendee suggested that she should deliver the 2017 Lecture! "

Jamila arrived with a profound understanding of our business and event objectives. She was warm and approachable, with a genuine interest and passion for the product, and this made her presence well received by influencers and vendors alike.

Jamila Rizvi is an author, presenter and political commentator. She is the Chief Creative Officer for the Nine Network's Future Women and hosts their digital events offering. Jamila writes regularly for The Sydney Morning Herald, The Age, The Good Weekend and Sunday Life.

Jamila's best-selling book Not Just Lucky, a career manifesto for millennial women, was published by Penguin in June 2017 and long listed for the Australian Book Industry Awards in 2018. Her second book, an anthology of letters about the first three months of life with a newborn, called The Motherhood, was released in April 2017.

Jamila has since edited Untold Resilience, a collection of stories about older Australian women, and written a children’s book called I’m a Hero Too, both released in October 2020. She has been named one of Australia’s 100 Women of Influence by the Australian Financial Review, and is the 2020 Victoria Award for Excellence in Women's Leadership.

Jamila is the co-founder of the popular event series Tea with Jam and Clare, which she hosts with singer Clare Bowditch. The event attracts audiences in their thousands each year and has an online community of 10,000 women. She is also the host of Anonymous Was a Woman and co-host of The Briefing podcast.

Prior to entering the media, Jamila worked in politics as an advisor to the Rudd and Gillard governments. She has advised governments at the highest levels on issues including employment, women, media, child care, and youth affairs.

Jamila is an Ambassador for CARE Australia, and the RMH Neuroscience Foundation. She is a board member of the Melbourne’s Writer’s Festival and the 2020 Program Ambassador.

Jamila has travelled all over Australia speaking about her best-selling books, hosting conversations at corporate conferences, writers festivals, charity functions, and televised events. She is as comfortable running an intimate day-long workshop for 20 executive participants, as she is addressing audiences of 3000+ at the Sydney Convention Centre.