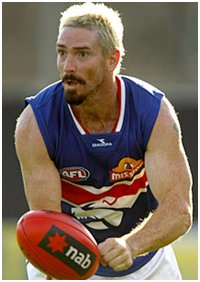 Jason Akermanis travels from QLD
Fee Range: Up to $5000

Jason "Aker" Akermanis is an AFL football legend who will go down in history as one of the all time greats.


The 2001 Brownlow Medalist and triple AFL Premiership player (2001, 2002 and 2003) played 325 games, kicked 407 goals and was 4 time All Australian. A crowd favourite that the fans flocked to see, "Aker" could do anything on the field, including his trademark handstand after the siren.
Aker always talked himself up on Friday not Monday like most athletes.
Today, Jason Akermanis is a highly sought after keynote speaker and media performer across all mediums. He splits his time between presenting radio, writing for the Herald Sun as an expert columnist and speaking as a professional speaker/MC.
On top of all this, he is happily married with two young girls under the age of 7.
Throw in ride days with his own go kart team and competition golf and time is short for this once in a generation player.
Though controversial, the public always want to know more about Aker and love watching and listening to him across a variety of media.
Subscribe
© 2022 Platinum Speakers