Having been a broadcaster with CNN, BBC and ESPN around the world, Jason Dasey brings a wealth of international experience and polish to any event, plus a unique insight into Asia, having worked extensively in Singapore, Malaysia, India, Indonesia and Hong Kong. 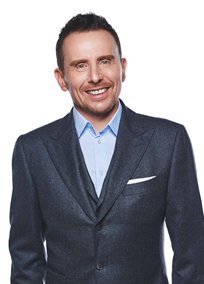 Jason is our first choice for all professional voice-over work that needs to be done for our discerning clients. He is quick to understand the brief and can always be counted on to deliver an impactful and convincing message. He was able to capture the emotions, pace and essence of the message we wanted to put across to our clients and we are very satisfied with his professionalism. We strongly recommend him for such work!

Given Jason’s years of experience as a professional communicator in front and behind the camera, he was the ideal corporate trainer for our Executive Presence and Managing Public Relations Courses. We received rave reviews from our clients who felt they had learnt a lot of practical and useful skills when communicating on camera, making them more confident speakers during press interviews. Jason is our top trainer in this field and is the first person we will recommend to our clients.

Jason Dasey travels from QLD
Fee Range: Up to $5000

Having been a broadcaster with CNN, BBC and ESPN around the world, Jason Dasey brings a wealth of international experience and polish to any event, plus a unique insight into Asia, having worked extensively in Singapore, Malaysia, India, Indonesia and Hong Kong.

Jason is based in Australia where he is a regular contributor to ABC News, but continues to work as a TV anchor for ESPN in India, and as a radio presenter for Singapore business station, Money FM through his company, Cockatoo Media.

As an emcee, he has hosted the glittering Asian Football Confederation Annual Awards five times, including the most recent addition in December 2019 in Hong Kong. His credits also include emceeing the All That Matters and Broadcast Asia conferences in Singapore, plus the launch of CAR Magazine in Malaysia, and hosting ESPN's Visit Britain tourism campaign promo in New Delhi around the 2019 ICC Cricket World Cup.

For Money FM, he hosted his own interview show in 2018 and 2019, and filled in as breakfast host in 2020. He also contributes regular radio segments for the Singapore business station on Australian tourism, highlighting his favourite spots in his homeland.

Also in 2020, Jason anchored the Australian Open for Sony India, which was the fourth time he has hosted the iconic tennis grand slam for the massive sub-continental market.

Jason speaks conversational Bahasa Indonesia and advanced French, and loves the challenge of hosting events in the languages.

A former CNN and BBC broadcaster, Jason is a journalist at ABC News Australia and hosts his own radio show on Queensland station 101FM in Logan. He is also a business and real estate presenter, having anchored the Property Line show on Property TV and digital programming on Biztech.Asia.

Before that, Jason was Australia's first presenter on BBC World News in London in 1995 before becoming Australia's first sports anchor on CNN International in 1999, broadcasting to more than 200 countries from Atlanta.

Jason has been a journalism tutor at University of the Sunshine Coast, guest lecturer at Bond University and Griffith University, and a media skills trainer for corporate clients in Singapore.

He joined ABC News Australia in 2020, covering the 2020 Queensland election, the coronavirus outbreak, extreme weather events in addition to national and international stories.

Jason Dasey was an Australian pioneer on global networks CNN and BBC despite suffering countless setbacks as he was beginning his career.

Find out how insights he picked up from famous people he interviewed including Roger Federer, George Foreman and Nadia Comaneci, set him on the road to vast international success.