Jason McCartney OAM became a national hero in the wake of the Bali Bombings in 2002 and epitomises the Australian fighting spirit. His story is one of humanity overcoming adversity.  Jason’s story is powerful and impacting and is sure to inspire your audience. 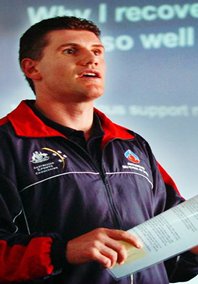 Jason’s presentation to 160 KPMG Tax and Legal delegates was truly inspirational. To sit in a room where there was complete silence for the full 45 minute presentation was amazing. The extended standing ovation and the end of the presentation was not only a mark of respect to this very humble man, but also allowed the delegates to collect their thoughts and emotions after the delivery of such a powerful message. Perspective is a powerful word – of which Jason taught us the true meaning. He certainly showed us that “it is not you are dealt with in life, but rather, how you deal with it”. A truly unforgettable presentation and experience.

Excellent. Jason exceeded our expectations. He touched the audience through his genuine, honest and moving presentation. Jason told his story as if he was amongst friends and family.

Jason McCartney was excellent. He had everyone spellbound, not a word in the crowd while Jason was speaking. Well spoken, well presented and a true gentleman. No hesitation in recommending him. Nothing but good reports from our guests

Excellent. Jason has a great story and a wonderful personality that shines through.

Fantastic….my guys were very, very happy…both from an entertainment view and some excellent business messages.

Excellent – I appreciated the fact that he spoke without notes, focussed on “telling the story” and addressed the broader range of experiences beyond his link to football.

Jason’s speech was great. It made me see everything in a different perspective.

What a great day it was. What a powerful story!!!

Excellent.  Jason was very friendly towards all of the guests at the function. He was happy to talk, have photo's and give autographs all night. He also stayed longer than required, which was fantastic. Jason's presentation was very moving. It was amazing to see how far he had come in terms of his recovery in just 12 months, he really is an inspiration. He spoke very well, and he was happy to answer the audience's questions at the end. I have had nothing but positive feedback about his presentation from the guests, and I would highly recommend him to others.

Jason McCartney OAM travels from NSW
Fee Range: Up to $5000

Jason McCartney OAM became a national hero in the wake of the Bali Bombings in 2002 and epitomises the Australian fighting spirit. His story is one of humanity overcoming adversity. Jason, a young Australian with an exceptional talent to play Australian Rules Football, was thrust into the hearts and minds of all Australians through his courageous fight-back from horrible burns he suffered in Bali.

Few will forget his triumphant return to AFL football on the evening of June 6, 2003. He helped in scoring the winning goal, but his ultimate glory was a victory over terrorism and a "win" for all those who survived Bali. Jason was awarded an OAM in October 2003.

Jason started his career when the Collingwood Football Club drafted him at pick number 4 in the 1990 National Draft. Following 4 seasons with the Pies, Jason crossed over to the Adelaide Crows where he spent another 3 seasons. In 1998, Jason returned to Victoria, playing the next 6 seasons for his beloved Kangaroos. In 2002 he was inducted into the AFL 200 Games Club.

Jason is a remarkable guest speaker with an amazing ability to inspire audiences with accounts of how he overcame adversity through amazing support from family, friends and teammates. Jason is also involved with many charities, including ambassador roles for the Peter Hughes Burn Foundation and the K.I.D.S Foundation.

Jason has remained actively involved in the AFL since his retirement as a coach and administrator. In 2016 after 5 years in the role as List Manager at the Western Bulldogs Football Club, Jason played an important role which saw the club win its second ever AFL Premiership and its first for 62 years.

Jason’s story is powerful and impacting and is sure to inspire your audience.

The Jason McCartney Story – The determination to never give up