Print
A multi-talented performer and writer, Jean Kittson is one of Australia's best known and most popular comedians, amusing audiences in theatre and print, on radio and television. Jean is also recognized as one of Australia’s most popular corporate hosts, keynote speakers and facilitator of conventions, conferences, award nights, debates and quiz nights. 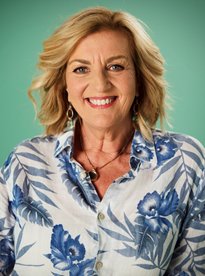 Jean is a fantastic speaker and always is extremely well prepared This was a mining industry function and she had researched it well. This is the second time Ms Kittson has been our MC and once again she did an outstanding job.
​Mitsui & Co

​What a brilliant performance! Not only did you contribute a creative address but you did so with charm and good manner.
​Housing Industry Association

​Jean was fantastic - she really contributed to the debate and I appreciated the extra time and effort she kindly gave to ensure the event was a success.
​Guardian Pharmacy
​
Very few comedians would take the time to research an organisation as thoroughly as Jean did. Her efforts were well rewarded by a very appreciative audience. That is when they could stop laughing to do so!
Nursery & Garden Industry Victoria
Jean Kittson travels from NSW
Fee Range: $5001 to $10000

Jean Kittson is an author, public speaker and commentator.

She is an advocate for education, youth, health, equal opportunity and aging.

She is a regular speaker on the role of women, both at home, in education and in the workforce. She has encouraged an important conversation about women’s health by writing “…the definitive book…” on menopause; “You’re still hot to me. The joys of menopause.”

She was invited to speak about menopause at the National Press Club.

Jean is also an actor, comedian and scriptwriter for stage, television, theatre, radio, magazines and newspapers. She is the author of two books and has contributed to many others.

She has been a regular columnist with New Weekly, Sunday Telegraph, the Sydney Morning Herald - Sydney Magazine, Inspire Magazine, the Readers Digest Health Smart Magazine and the on-line magazine, The Hoopla.

She has conversed twice on Conversations with Richard Fidler and presented for Women of Letters twice.

She was a founding Director of the National Cord Blood Bank, the inaugural chair of the Australian Gynaecological Cancer Foundation (AGCF) and a founding Ambassador for Ovarian Cancer Australia.