Print
Jeff McMullen is amongst Australia’s most highly respected and experienced journalists, authors and filmmakers for over 45 years. An ABC television foreign correspondent, Four Corners and 60 Minutes reporter, and the host of the 33-part issue... 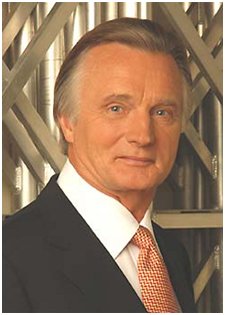 One of the most outstanding, thought-provoking and moving speeches I have ever heard. This view was echoed by the majority of 300 guests attending the lunch. We have been inundated by congratulation messages for the event, all focusing on Jeff's speech. Many of our guests left the lunch with a renewed determination to make a change to their lives and the world - this is how powerful Jeff was.

Excellent choice of speaker and topic, let's have more of it!

Jeff is always so inspiring: his length, depth and knowledge is amazing.

Inspired and passionate about the subject matter. He held audience interest throughout.

Jeff made a profound impression on many/most/ perhaps all persons in the room (200 pax). When he finished, delegates leapt out of their chairs and ran to speak with him personally. This is a sign of a speaker well received! It was all I could do to get Jeff out of the building past the hordes of new fans and into his car so that he could make his flight on time. We want Jeff back next year, and hopefully in an expanded role, subject to client discussion.

Jeff's pre-existing knowledge of, and passion for, this subject, made a big difference to the Roundtable and Forum. He led a very powerful goup smoothly, expertly, and with considerable perception. In the end, he delivered far more than called for in the brief.

Jeff McMullen is amongst Australia’s most highly respected and experienced journalists, authors and filmmakers for over 45 years. An ABC television foreign correspondent, Four Corners and 60 Minutes reporter, and the host of the 33-part issue series on ABC Television, Difference of Opinion.


Throughout his professional life Jeff McMullen has written, filmed and campaigned around the world to improve the health, education and human rights of indigenous people. He is the Honorary CEO of Ian Thorpe's Fountain for Youth, developing early learning programs and the Literacy Backpack project in 22 remote indigenous communities over the past nine years.
As a Director of AIME, or Australian Indigenous Mentoring Experience, Jeff has helped grow this highly successful education movement connecting university undergraduates as mentors for Aboriginal high school students in urban areas. Jeff is also a Director of the Australian Indigenous Engineering Aid Summer School program that is building opportunities in tertiary education.
As a Trustee of the Jimmy Little Foundation, Jeff also works with Aboriginal doctors and medical services to improve dialysis and introduce the nutrition program, "Uncle Jimmy's Thumbs Up", aimed at reduction and prevention of the epidemic of chronic illness.
He has chaired the council meetings of the National Aboriginal Community Controlled Health Organisation and joined their advocacy in Federal Parliament. At the Prime Minister's 2020 Summit Jeff was among the 100 people focused on ‘Closing the Gaps’ in indigenous life expectancy and improving the well being of all Aboriginal communities. He is also Patron of the University of Canberra's Healthpact Centre developing health promotion and social equality programs, especially for Aboriginal children.
In 2006 Jeff McMullen was awarded an Order of Australia (AM), for service to journalism and efforts to raise awareness of economic, social and human rights issues in Australia and overseas, as well as service to charity. Variety, the children's charity, declared McMullen Humanitarian of the Year for 2006. He directed the $10,000 award into the Literacy Backpacks in the Jawoyn communities to enhance this early learning project.
Throughout his professional life, Jeff McMullen has worked to help the Red Cross, The Fred Hollows Foundation, Queensland Education Department’s Indigenous Literacy program and the Australian Indigenous Doctors Association. Audiences worldwide have hailed his passionate presentation of a world view that invites each person to understand the Big Picture and to seize opportunities to make a difference.

The Art of the Interview