Jenny Brockie is one of Australia's most respected journalists, renowned for her skill and fairness that she brings to popular SBS program Insight.  In the corporate arena, Jenny is an exceptional facilitator, moderator, MC and speaker. 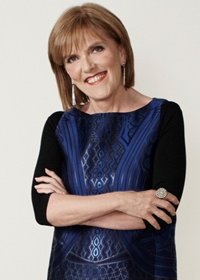 As the host of Insight, Jenny Brockie has repeatedly proved her supremacy in that most perilous of jobs - TV forum ringmaster … Acting simultaneously as moderator, interviewer and crowd-tamer, Brockie excels where so many flail by corralling her disparate corps of commentators in a manner that emphatically develops issues instead of labouring them.
The Age

Jenny was received well. She engaged well with the audience in her initial opening comments and continued to effectively manage the panel and audience questions time to best meet our objectives.
Knox City Council
Jenny Brockie travels from NSW
Fee Range: POA

Jenny is well known for hosting SBS TV's Insight, where she facilitates an always lively and thought provoking discussion on a wide range of topics with more than 50 participants weekly. Jenny's experience on Insight and as a journalist, documentary film maker and interviewer, give her a unique set of skills which she uses to elicit information in an informative and entertaining way. Her exceptional ability to draw out people's ideas, get them talking to one another and encourage audience participation is a hallmark of her work as a facilitator.

Jenny's career spans television, radio and print. An award-winning documentary filmmaker she produced Cop It Swee, The Devil You Know, So Help Me God, Our Street and Bad Behaviour.

Her work as a television journalist and documentary film maker has earned her a coveted Gold Walkley, two AFI Awards, a Logie, a Human Rights Award, two Law Society Awards and another Walkley. In 2006 and 2008, Jenny received United Nations Association Media Peace award for her work on Insight. In 2013, she won the Walkley All Media Interview Award for 'Young Mob', a special Insight episode featuring Aboriginal teens in Alice Springs.

Areas of interest include: