Print
Major General Jim Molan has been at the forefront of leadership for many years heading up operations of battle and succeeding in the progressive reshaping of the Middle East. Retiring from The Australian Army in July 2008 after 40... 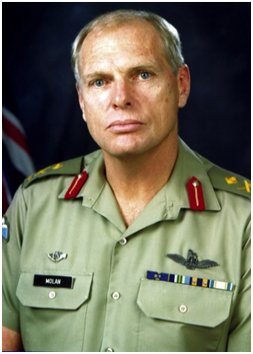 Major General Jim Molan has been at the forefront of leadership for many years heading up operations of battle and succeeding in the progressive reshaping of the Middle East.


Retiring from The Australian Army in July 2008 after 40 years service, Major General Molan has seen service across a broad range of command appointments in operations, training and diplomatic genres. US Ambassador Negroponte wrote, “Molan excelled as a soldier diplomat in the complicated political and military environment of Iraq....he provided the wise counsel and strong leadership necessary for our success in creating a democratic, secure and free Iraq....Major General Molan literally made history and helped reshape the Middle East.”

Fluent in Indonesian, a helicopter pilot, Commander of an Infantry Battalion, Commander of Australian Defence Colleges, service in East Timor and Solomon Islands all provided the necessary training and experience when in his posting to Iraq was promulgated.

If you think today’s businesses challenges are tough, then the experiences of Jim Molan will provide you with a unique perspective and assist you to explore approaches for achieving success in turbulent times.

In April 2004, Major General Jim Molan deployed for a year to Iraq as the Deputy Chief of Staff for Operations (Chief of Operations), Headquarters Multinational Force during continuous and intense combat operations. This period covered the Iraqi elections in January 2005, and the pre-election shaping battles of Najaf, TalAfar, Samarra, Fallujah, Ramadan 04 and Mosul. For distinguished command and leadership in action in Iraq, Major General Molan was awarded the Distinguished Service Cross by the Australian Government and the Legion of Merit by the United States Government.

Major General Jim Molan has a Bachelor of Arts degree from the University of New South Wales and a Bachelor of Economics degree from the University of Queensland. He maintains an interest in aviation and holds civil commercial licences and instrument ratings for fixed and rotary wing aircraft. He is also a Fellow of the Australian Institute of Company Directors (FAICD) and is accredited as a Master Project Director (MPD).

After his retirement Jim Molan has published his first book “Running the War in Iraq” through Harper Collins and looks forward to spending his next few years engaging with corporate Australia through speaking opportunities. A Leadership speaker, Jim’s lessons in multi functional environments and his role and perspective on the rebuilding of Iraq have interesting insights for all corporate entities and organisations. Jim’s experience in Defence Material and its relationship with civilian contractors makes him in high demand to consult and assist industry in the Defence arenas. Since retirement he has accepted an associate role with an aerospace company and is a Director of a medical manufacturing company.

The feedback has been tremendous and your message was loud and clear. We really appreciate you taking the time to share your experience and wisdom.
5th World Congress of Paediatric Cardiology and CardiacSurgery – Cairns

Everyone was unanimous in their praise for you as a speaker and for your contribution to the success of the evening. Your ability to speak with humour and candour on the serious topics was very impressive.
Australian Industry & Defence Network

“This is a belated ‘thank you’ for your wonderful presentation at Risky Business symposium. Your talk was inspiring and exciting and proved to be a major topic of discussion throughout the conference. It was referred to by many speakers over the course of the meeting, in such a variety of contexts.”
Royal Children's Hospital"

You stimulated our thinking whilst giving us a precious insight into the reality and subsequent leadership behaviours that need to be processed in such high stake settings. Also we simply really enjoyed having you around and felt a natural affinity. Rob’s now got a few ‘General Jim’ sayings to add to his leadership quotes (something about a sixpence!) and it’s a really valuable experience for the whole team to be stimulated by exposure to someone who can so convincingly ‘walk the talk’.
LIW

Your presentation at the Leader Forum was really well received, and we've had great feedback.
AMP Capital Investors Limited

Leadership in Challenging Times
Leadership at all levels – top to the bottom
Leading, managing, changing and winning in Tough Times
Thriving and Winning in Chaos
The Value of the Person
Subscribe
© 2022 Platinum Speakers