Jo Stanley is a qualified and accomplished 1:1 Executive Coach, certified by the Institute of Executive Coaching and Leadership. She has been coaching for 4 years and brings her experience as a leader in the media industry, as a post-graduate in management studies, and as a mindfulness advocate to each session, allowing her to be creative with her coaching approach. 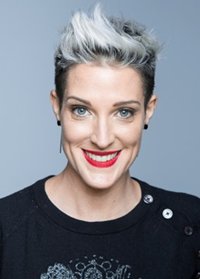 Jo's ability to connect with her audience, in an entertaining manner, no matter how diverse the gender, age, background, enables her to provide context to key themes such as brand,

self-confidence, transparency which in turn supports people to find better pathways for their own self-development.

It was very special to hear Jo’s story and to receive her wisdom from her experiences. She is truly inspirational!

Jo is so many things; she is an honest, strong, admirable, enthusiastic woman with completely different life experience that has so much to offer, teach and educate people. Kikki K

Since being discovered performing stand-up in a dingy Collingwood pub some time in the early 2000’s, the warm and vibrant Jo Stanley has risen to become a household name—and for good reason!

Born and raised in Melbourne, Jo Stanley rose to fame in 2003 as one half of The Matt & Jo Show, the hilarious and heartwarming breakfast radio duo on Fox FM. Together with funnyman Matt Tilley, Jo enjoyed 10 successful years of breakfast radio—at their peak, the duo was the most listened-to radio show in the country, with a whopping 6 years at Number 1.

Famous for their banter and warm authenticity, the pair interviewed some of the world’s biggest names, crossed live to some of the world’s most critical moments in history, and regularly made stars out of every day listeners by facilitating the sharing of their stories. At the end of 2013, after a hugely successful decade on air, The Matt & Jo Show bid a fond farewell to their listeners.

Jo went on to spend 2 years co-hosting Weekend Breakfast, broadcasting to 52 stations nationally on Southern Cross Austereo’s Today Network, and then in 2016 joined Anthony ‘Lehmo’ Lehmann on Gold 104.3 to form a new breakfast show, Jo and Lehmo. The on-air chemistry between Jo & Lehmo was clear to see with the show’s ratings growing consistently, culminating in the show rating the Number 1 FM breakfast show in Melbourne in November 2017- the best result for the station in over ten years.

At the end of 2017, after 14 incredibly successful years in breakfast radio, Jo welcomed some well-earned sleep-ins and stepped away from the early morning radio mic – for now!

Having appeared on all TV networks in Australia, Jo is currently co-host of The House Of Wellness on Channel 7, where she loves sharing her passion for mindfulness, meditation, gratitude and self-compassion. She also appears regularly on The Project on Ch 10, writes a column in the Sunday Life Magazine and is the creator of the Play Like A Girl book series for readers aged 8 – 10, about an Under 11 girls’ footy team.

With 25 years experience as a performer, Jo is also a dynamic and entertaining speaker, facilitator and MC. She has MC’d and presented keynotes for organisations of all kinds, including local government, the AFL, Australian Hotels Association, National Association of Women in Construction, and Institute of Managers and Leaders. Her areas of expertise are Purpose, Personal Brand, Gender Equality and Women’s Empowerment, Mindfulness and Resilience.

Jo has facilitated workshops on Personal Brand, Resilience and Presentation Skills, for organisations like Medibank, NAB, L'oreal and Metro Trains, and has facilitated panel discussions for the likes of Mercedes Benz, Ellis Jones and the Melbourne Writers Festival. Some of her career highlights include appearing as a guest speaker at Radio Days Europe in Vienna, and spending an hour on stage interviewing Sarah Jessica Parker for Chemist Warehouse.

Jo is a qualified and accomplished 1:1 Executive Coach, certified by the Institute of Executive Coaching and Leadership. She has been coaching for 4 years,and brings her experience as a leader in the media industry, as a post-graduate in management studies, and as a mindfulness advocate to each session, allowing her to be creative with her coaching approach.

Jo is a member of the Ministerial Council on Women’s Equality, advising to the Victorian Minister for Women; ambassador for Smiling Mind; patron for Wellsprings for Women, providing programs and services for migrant and asylum seeking women; and patron for the Lighthouse Foundation, which provides homes and ongoing, loving support for young people experiencing homelessness.

In 2020 Jo will be the new host on the House of Wellness radio show hosted on the Macquarie Media Network, the one-hour weekly program is live on air each Sunday at 8am AEST. In addition Jo will also be hosting a segment one morning a week with Eddie McGuire on Triple M’s Hot Breakfast.

Jo loves her daughter Willow, her husband Daz, exercise, meditation and the Collingwood Football Club, but don’t hold that against her.

Jo’s talent, humour and warm personality make her a popular and much-loved Aussie star. And with her diverse skills and wealth of experience, we’re sure we’re only going to be seeing more of her.

Juggling motherhood with a career