Print
John Novak is well recognised as a mind trainer for many elite athletes.  His motivation and drive stimulates strong mental preparation that promotes the mindset one needs to achieve success. These practices are often translated in the boardroom allowing staff and management to get focused and succeed. 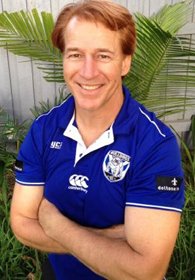 On behalf of the CPA team we would like to give testimonial and great thanks to John for the valuable contribution he has bought to the company. CPA are fully supportive of the concepts and teachings which have undoubtably improved the lives of our employees, making for a more cohesive and higher performing team. John’s work and the Boomerang Effect program has taken and continues to push our staff and company culture to new heights. The authentic and genuine delivery of the Boomerang Effect message is easily conveyed by John as he lives and breathes what he does.

CPA can attest to the energy and lift this has brought to our business and would raise in any other business as the Boomerang Effect pushes people (at their own levels) to be more elite in every way.

The intensity and structure of sporting competition is in many ways a wonderful metaphor for business life.  John Novak’s remarkable success in working with sporting champions and champion teams demonstrates the validity of his approach, a success that will translate directly to business. The Boomerang Effect approach will no doubt be a powerful tool for entrepreneurs and other business leaders working to translate their business visions to reality and enable value creation.  John’s work over the past 20 years in bringing together the Boomerang Effect provides a powerful structured tool for business and sports champions to change the way they think and operate to be more present, positive and success based; to remove limited mindsets and to allow breakthrough.

Since working with John I have won back to back world championship gold medals, four Commonwealth games medals including two gold and an Olympic bronze medal. I would highly recommend John Novak to any sports person or professional of any field.

John Novak travels from NSW
Fee Range: Up to $5000

John Novak has over 3 decades of experience in speaking, lecturing and motivating people from all walks of life.

Currently working with the Manly Sea Eagles, John was Head of Mind Management at NRL's Canterbury Bulldogs from 2012-March 2017, with 2 grand final appearances and a minor premiership over the past 3 years with the team. Prior to this he was the Mind Coach for the Manly Sea Eagles during the year they won the 2011 NRL Premiership.

John enjoys sharing his cutting edge sports mind program termed the BOOMERANG EFFECT. He works closely with all team members, coaching and support staff to develop a positive, resilient and mentally tough team that bounces back and achieves their potential. Among his other numerous positions in his career, in 2010-11, John was Head of Sport Management at the International College of Management, Sydney (ICMS). This role included lecturing, coordinating the degree program and working with staff and students to develop an innovative sports management programs.

John Novak has an inspiring background with 3 academic degrees, a third dan black belt, and known as the man who defeated Dolph Ludgren (‘Drago’ from Rocky 4) in a Karate tournament. He has 5000 aerobics classes under his belt and sold more than 400,000 Aussie Fit videos worldwide.

John is the author of "BE Golf Mind Game", "The Answers Lie Within", and co-author of “Alive and Kicking” and has over the last 20 years worked as a Sports Motivator, Performance Coach and Mind Trainer for Elite Athletes who have earned National, International, Commonwealth and Olympic Games recognition.

Currently he has a weekly radio spot on 2UE Sports Mindset concepts and observations from current sporting news items. His work with The Boomerang Effect has seen John featured in mainstream media including Channel 9 News, Channel 7 News, The Sydney Morning Herald, The Daily Mail and The Australian frequently

John has been extensively interviewed on major television programs including Channel 9 News, Channel 7 News, A Current Affair, and featured on Good Morning Australia as a Wellbeing and fitness reporter and more recently featuring on Fox TV show, Bill and Boz.

John draws upon Zen concepts based on years of Martial Arts training, competing and instructing. "The power of positive thinking is just the 'tip of the iceberg' of what goes on in the mind of a champion", John stresses.

John believes - "The absolute key to success in my field is to deeply understand the individual I am working with to clearly identify their 'best self' in respect to their mind, body, spirit and emotions. I help to facilitate the brilliance of my client"

John's comprehensive combination of western and eastern approaches have catapulted him into National and International prominence as a Sports motivator and sports coach with a clear difference. He is a leader in his field!

In his role as a speaker, John's clients include some of Australia's leading businesses - such as Ernst & Young, Law Australia, Coca Cola, MBF, Hooker Real Estate, NSW Police Force, Reebok and Telstra.