Print
John 'Woosha' Worsfold bought immense success to the West as senior coach of the West Coast Eagles from 2002 until 2013. John is the newly appointed Bombers coach in 2016! 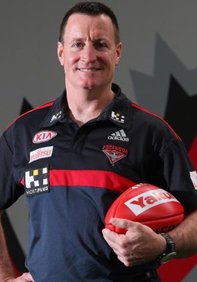 Great speaker. He provided an in depth presentation regarding his values and highlighted the importance of vision. Audiences provided good feedback to John's presentation.

John 'Woosha' Worsfold bought immense success to the West as senior coach of the West Coast Eagles from 2002 until 2013 when he recently retired. The Eagles didn't miss the finals in his first six years at the helm which is an achievement rarely replicated.

John Worsfold is one of Western Australia's best known and most outstanding football personalities. After winning the West Coast Eagles best and fairest award in 1988, he was appointed captain in 1991 until his retirement in 1998, playing 209 games for the team including two premierships in 1992 and 1994.

Holding the coaching position from 2002, during which time John led the club to eight finals series and a premiership in 2006, making him only the fourth person in the history of the AFL and VFL to both captain and later coach the same club to a premiership, a truly extraordinary feat. In Round 9 of the 2012 season he surpassed Mick Malthouse's record for most games coached at West Coast.

In 2004, John was named an inaugural inductee into the West Australian Football Hall of Fame and at the end of the 2011 season awarded the inaugural Allan Jeans Coach of the Year award.

In October 2015 John was appointed Senior Coach of the Essendon Football Club.

John is an entertaining speaker who focuses on team work, team building, achieving and maintaining goals. John also presents on leadership through adversity, describes his management approach through the tough times. He uses the wooden spoon year of 2010 as an example.

John is also excellent on how to keep your team focused on their future goals and motivated to keep striving and improving. John will also tailor his presentation to suit your specific requirements.