As one of the country’s most charismatic personalities and known well for his profile on radio and TV, Jules Lund is now founder of TRIBE. A businessman and entrepreneur Jules speaks in the areas of digital space, future trends, social media, advertising and start-ups. 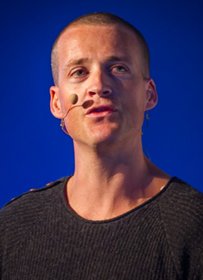 Jules developed excellent rapport with the audience and was able to improvise on the script provided, which made for a very natural, enjoyable presentation. Jules was also able to incorporate events and changes to script that came up on the night, with ease and was a pleasure to work with!
EMG Events

By the time he was just 23, Jules had hosted his own weekly radio show on The Today Network, a music television program and the ESPN X Games in Brazil, Malaysia, Philadelphia and Spain.

His sparkling wit and wicked sense of humour has since rewarded Jules with an impressive list of credits including a nine year stint on Getaway, where he jumped, quite literally, headfirst into some of the greatest experiences on the planet. From Saturday morning music VJ, to hosting game-shows, Reality TV and live events. Jules has mediated panels of comedians, donned spandex and skates for Torvill & Deans Dancing On Ice and even produced a documentary for Channel Nine. But hosting the TV Week Logie Awards Red Carpet has always been a personal favourite, with Jules front and centre for the past 8 consecutive years.

His national audience and popular appeal has grown from his ten years hosting of prime time TV programs and five years of on air with Austereo. Jules hosted the Today Network national Drive show with Fifi Box before moving to Sydney breakfast radio as a host on Sydney’s 2DayFM with fellow media legends Merrick Watts, Sophie Monk and music icon Mel B.  In 2015 Jules teamed up with Emma Freedman to host The Scoopla nationally on weeknights.

After 15 years of hosting some of the biggest TV and Radio shows in the country, Jules took the audacious step of founding his own tech company, TRIBE. Launched in Nov 2014, TRIBE is a digital marketplace that connects social media influencers with leading brands to transform word of mouth recommendations. Celebrity and everyday influencers who have built audiences around a particular passion or expertise, can now submit and get paid for posts featuring products they already use and love.

Jules’ social insights have since made him a unique asset, being invited around the country to present to Australia’s biggest agencies on the power of Social Influencer Marketing.