Kathryn Eisman is a two-time Emmy Award nominated newsreader, presenter and reporter, international bestselling author and speaker.  Kathryn has worked at the pinnacle of television in the USA and Australia for over 15 years, with extensive experience presenting and producing news, entertainment, current affairs, fashion and lifestyle programs, across the USA and Australia. 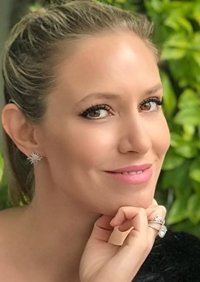 Hailing from Sydney, Kathryn completed a degree in Communications and Journalism at the University of Technology Sydney (UTS).

In 2002, immediately upon graduating, Kathryn headed to New York, where she joined NBC’s TODAY in New York as their features reporter and presenter for the number one rating breakfast news show in the number one news market in the world. The role made her the youngest on-air reporter in NBC history and one of few Aussie journalists to work on camera in US television.

During her 5 years at NBC in NY Kathryn gained invaluable experience working in the fast-paced live News environment and built a reputation for her talent both in front of and behind the camera, pitching, producing, writing and presenting all of her stories, live on location and in studio behind the desk.

Kathryn’s innovative writing style and relatable, charismatic on-air presence often garnered the highest ratings on the broadcast for her segments. Kathryn proved her versatility as a journalist covering breaking news, human-interest stories ranging from human trafficking to identifying and covering new social and cultural trends. Kathryn was also responsible for all NY Fashion Week coverage for the station with nightly live broadcasts and exclusive features with the world’s leading designers, ranging from Oscar de la Renta to Tom Ford.

Kathryn’s talent covering entertainment news was noticed and she was made the sole host of their top rating prime time Saturday night entertainment show, BTS: Made In NY, also on NBC. She was lucky enough to meet and interview some of the biggest names in show business, including George Clooney, Jerry Seinfeld, Sarah Jessica Parker, Clint Eastwood, Reese Witherspoon, Nicole Kidman, to name a few.

In 2009 Kathryn moved to Los Angeles to head fashion and lifestyle coverage for E! News at Comcast NBC Universal, where she received two Emmy Nominations for her work.

Kathryn helped secured E! as the exclusive broadcast partner for New York Fashion Week filming live daily shows from inside the tents and was responsible for some of the network’s highest rating exclusive segments including her “Day In The Life” series with Kendall Jenner and Hailey Baldwin. The global exclusive with Kylie Jenner addressing facial transformation for the first time as well as countless exclusives with artists including Taylor Swift, Selena Gomez and Kanye West. Kathryn was also responsible for identifying and covering all fashion and lifestyle trend content for the show.

In 2016 Kathryn was handpicked by Tyra Banks to help launch FabLife on ABC alongside Chrissy Teigan and Joe Zee. Kathryn was responsible for all business related content as well as self-improvement, lifestyle and beauty segments for the national show.

Kathryn then hosted and helped developed a 27 part series for Yahoo! Called ‘Secrets to her Success”, interviewing a wide range of women who have achieved excellence in their chosen fields, from US Senators to Olympians.

Prior to returning to live in Australia, Kathryn also worked as the LA Correspondent for The Morning Show on Seven. This included Kathryn pitching, writing, producing and hosting exclusive feature length segments, including behind the scenes at The Emmy Awards with Jimmy Kimmel and exclusives with Jimmy Choo founder Tamara Mellon, Rachel Zoe and two part specials with Kardashian/Jenner cosmetic dermatologist Dr Simon Ourian on at “The changing face of Hollywood”. Kathryn also frequently reporting live from their LA bureau on all breaking entertainment news, including Prince’s death, The Academy Awards, The Royal Wedding and Meghan and Harry’s departure from royal life.

Additionally for the past five years Kathryn has been the Los Angeles based showbiz reporter for Seven’s breakfast show, Sunrise. Covering LA based TV and film interviews with stars including exclusives with Ariana Grande, Will Smith, The Black Eyed Peas, Margot Robbie, Danny DeVito, Dwayne Johnson and Natalie Portman, to name a few. Kathryn also hosted their recent live Sunrise rooftop concert series with The Jonas Brothers.

Away from the camera, Kathryn has authored two international Bestselling books, winning Cosmopolitan Magazine’s Fun Fearless Female of the Year in the Author category, published in 10 languages and fifteen countries and has contributed to many more books.

Kathryn has also written monthly columns for Men’s Health Magazine (USA), CLEO (Australia) and contributed to publications including The New York Times, Marie Claire, Cosmopolitan, Vogue, SMH and has traveled the globe speaking to over 100,000 people

Kathryn is an ambassador and former big sister for SISTER-TO-SISTER, a charitable life changing organization that mentors teenage girls from high risk backgrounds.

A successful entrepreneur, Kathryn is the founder and creative director of High Heel Jungle a line of fashion socks that have been featured in Vogue, Elle, Cosmo and worn by Michelle Obama, Sarah Jessica Parker, Elle Fanning and Kylie Jenner, sold at leading boutiques globally, including Nordstrom, Fred Segal, Free People and Cosmopolitan Shoes.

After a distinguished career in the US, Kathryn has returned to Australia continue the next exciting chapter in her career and raise her two young daughters in Sydney, the city she grew up in.

Kathryn is also a highly sought-after Master of Ceremonies (MC) and conference/event facilitator. Her combination of quick wit, polish and warmth has seen her host the G’Day USA Australian Showcase in Los Angeles, Fundraisers for former New York Mayor Rudy Giuliani and The Sydney Children’s Hospital Annual Fundraiser. She is also a highly sought after keynote speaker.

“Hollywood’s Personal Branding Secrets and How to Use Them”

“What I Learnt on the Red Carpet About Success (and Failure)”

“The Psychology Of Style”

“How To Reinvent Yourself for a post-pandemic future”

“Unleashing The Influencer In You: How To Create, Connect and Convince”