Kerri-Anne Kennerley is undoubtedly one of Australia’s most iconic media personalities and a favourite of Australian television audiences for more than 50 years.  In 2017, she became the third woman to be inducted into the TV Week Logie Hall of Fame. 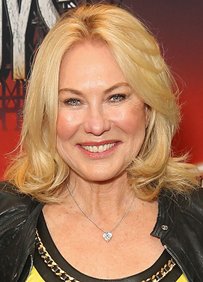 Kerri-Anne was the ultimate professional. Having to deal with flight cancellations and then the long trip out to Maroondah, nothing seemed to faze her, in fact Kerri-Anne had time to change clothes and glide into the room with plenty of time. Kerri lit up the stage the moment she walked on (in impossibly high heels) and having seen Kerri-Anne interview others, it was a delight to hear her story for a change, view the presentation and see that in business she has always been prepared to take up a challenge and put herself out there, it wasn't always that easy for the 30 years she was involved in the television industry. Our 220 guests were thrilled with her presentation, her warmth and openness towards the questions asked, and she held nothing back. The feedback from the event has been fantastic. It was a delight Kerri-Anne, thank you.

Kerri-Anne walks into a room and lights the place up. She is an outstanding speaker. We used her for a women's event but she would be equally captivating in an audience of mixed gender.

Kerri-Anne Kennerley is undoubtedly one of Australia’s most iconic media personalities and a favourite of Australian television audiences for more than 50 years.

In 2017, she became the third woman to be inducted into the TV Week Logie Hall of Fame where she confessed “I didn’t realise it at first but this is now my 50th year in television and there hasn’t been a single year, between one thing and another, that I have not done something on television.”

A true ‘triple-threat’, Kerri-Anne toured Australia at the age of 19 as a cabaret singer before jet-setting to Jamaica and then New York where she later remained for another five years working various jobs within the entertainment industry.  Returning to Australia in 1981 at age 28, Kerri-Anne was immediately snapped back up by the Network Ten, landing her career changing spot as co-host of Good Morning Australia, where she stayed for over a decade.

During times when radio was very much a ‘man’s game’, Kerri-Anne stepped up as a fill-in at Radio 2UE in Sydney and then took over the breakfast shift at 2CH in 1994, where she also became Chief Executive Officer of the station.

It was not long before the television executives came calling again with KAK hosting her own show Midday with Kerri-Anne for the next 10 years – which became Australia’s most-watched daytime program, and earning her Gold Logie nominations in 1997, 1998 and 1999.

Kerri-Anne’s autobiography, A Bold Life, was released in October 2017 sharing the extraordinary story of a unique and driven woman who built her career in one of the most fickle and male-dominated industries.

Kicking off the year In 2018, Kerri-Anne was honoured with Australia Post‘s Legends Award, which featured her face on an official stamp for 12 months alongside other TV royalty including Daryl Somers, Denise Drysdale, Bert Newton and Ray Martin.

More recently, Kerri-Anne made her long-awaited return to daytime TV as a panellist for Ten’s morning show, Studio 10 where she has been since 2018.

Away from the spotlight, Kerri-Anne is a successful businesswoman and tireless charity worker. She served on the Council for the Order of Australia where she was so proud to be able to honour great Australians, and Since 2009, Kerri-Anne has been a Patron for Look Good Feel Better.

A long-time golfer, Kerri-Anne also sits on the prestigious board of Golf Australia.