Kerry O'Brien is one of the most prominent and respected names in Australian journalism. Kerry is the former editor and host of The 7.30 Report and Four Corners on the ABC. Best known for his hard-hitting political interviews, he has won numerous accolades, including the top award in journalism, the Gold Walkley. 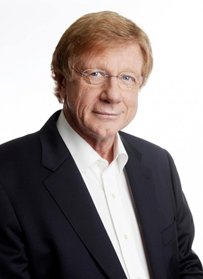 Kerry was liked by the audience as he was well-versed in the subject areas after thorough research leading up to the Conference. He was flexible with the direction of the topics.

Kerry was professional, well informed and enthusiastic about the topics of the conference. He was very well received - a great addition to our events.

Over 40 years, Kerry O'Brien has worked in newspapers, wire service and television news and current affairs, as a general reporter, feature writer, political and foreign correspondent, interviewer and compere.

Born in Queensland, Kerry O'Brien started as a new cadet with Channel Nine in Brisbane in 1966. His career highlights include a stint as AAP-Reuter Correspondent in Papua-New Guinea (1969-70), three years as a senior reporter with This Day Tonight in the early seventies, and two years with Four Corners from 1975-77 and again in 1985-86. He had three years as a press secretary, first for Labor leader Gough Whitlam in 1977 and then in the post-Whitlam era, with Deputy Labor leader, Lionel Bowen.

In 1983-84 Kerry O'Brien was the Seven Network's first North American Correspondent, in 1988-89 Ten Network's Political Editor, and for six years he was the compere/interviewer of the ABC's highly-respected Lateline program. In 1994-95 he also wrote a weekly national affairs column for Time Magazine.

From December 1995 until December 2010, Kerry O'Brien was editor and host of The 7.30 Report, the ABC's flagship current affairs program.

Since 2011, Kerry has been presenter and interviewer for the ABC's flagship investigative program, Four Corners. Four Corners has been on Australian television for half a century and returned to its original, hosted format with Kerry's arrival. He also anchors ABC TV's election night telecasts and moderated the controversial 1993 election campaign debates.

Over the years Kerry O'Brien has covered a variety of issues and events including various election campaigns, the Whitlam dismissal, the 1984 U.S. Presidential election, the Grenada invasion, the Marcos Coup in the Philippines, Australia's historic win in the 1984 America's Cup, the attempted Gorbachev Coup in Russia, and many others.