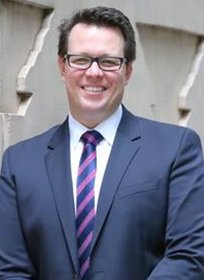 Kieren was engaging and his content was excellent. The audience warmed to him quickly. He was very approachable after the event, which our guests really appreciated.

Kieren supported the initiatives with vigor…. A fine young man. Spoke from the heart

Kieren was above expectation - extremely professional, friendly and courteous, and made himself available to mix with delegates afterwards. He spoke about his experiences, and related them easily to the layman and business person alike. Very articulate. Delegates commented without solicitation on how they believe Kieren was the best they had heard.

Kieren Perkins OAM is a hero of the Australian sporting arena. From Captain of Swimming at Brisbane Boys' College in 1990, to dual Olympic gold medalist just six years later, Kieren has added an impressively long list of awards and achievements to his name.

Kieren has held 18 Australian records, 3 World records, and 3 Commonwealth records and has represented Australia all over the world, including Monte Carlo, Rome, Auckland, Canada, Barcelona, Atlanta and, of course, at the Sydney 2000 Olympics.

Before the 1996 Atlanta Olympics, Kieren described the famous 1500 metre freestyle victory at the Barcelona Olympic Games, which saw him set a new World Record, as his greatest swimming victory. In 1993 his achievements were recognised with the Young Australian of the Year Award, and the Order of Australia Medal.

Kieren Perkins domination of the 1500 metre freestyle event looked to be over during the run up to the Atlanta Olympics. He barely made the Olympic team and then qualified for the 1500 metre final with the slowest time. It was in the race he proved his incredible strength, determination and athleticism to the world. Blitzing the field, he won a truly memorable gold medal. His outstanding victory captured the hearts of Australia. Following his silver medal swim at the Sydney 2000 Games, Kieren announced his retirement and moved his family to Sydney shortly after to begin the next chapter of his life.

Since then, Kieren has moved into the role of corporate ambassador and media personality.  He has been appointed to the board of the Starlight Children's Foundation and was a reporter for the Sydney based program Weekend.  During the World Swimming Championships in Fukuoka, he was also seen across the nation as a reporter on A Current Affair. Kieren was a partner in his own business development and training firm, offering companies advice on leadership and organisational culture.

Since his retirement from competition Kieren has been appointed to the board of the Australian Sports Commission and has moved into the role of corporate ambassador and media personality.

Kieren undertook the role of Head of Business Development and Acquisitions at NAB Private Wealth in Melbourne.

An impressive speaker, Kieren's draws on his experiences to inspire audiences to work as a team, set goals, create pathways to achieve them then deliver - regardless of pressures and distractions. He motivates and inspires self belief and is an excellent performer as MC or presenter on the public speaking circuit.

Kieren’s story of motivation, determination and success will inspire every audience.

Kieren’s new keynote Resilience (pre and post COVID-19) weaves his experience both as an Olympian (1500m Champion- the toughest and longest race in Swimming) and his current position as a Senior Executive at a large organisation.

Build the right team culture around you, to create the support needed for sustained success

Share take home strategies to build and practice your resilience

Change Management – the will to succeed