Print
One of Australia’s best known and loved comedians, Kitty appears regularly on the comedy/quiz show, Have You Been Paying Attention. She’s also known for her segments on The Project and The Weekly with Charlie Pickering as well as for playing the role of Rhonda on the award-winning ABC show, Utopia. 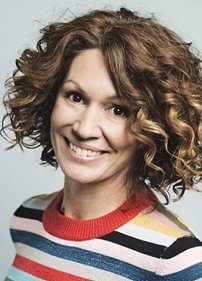 Her comic timing and bursts of physical theatre at the Athenaeum on opening night were nothing short of outstanding. Her material, delivered with devilish charm, was utterly brilliant.
This is a cracker of a show

Kitty was excellent, she stepped in last minute and was incredibly professional, very funny and did a great job in general.

A must-see show for fans of Kitty’s acerbic style: an hour of highly polished stand-up from a performer at the top of her game.
What’s on Comedy

Flanagan is spot on with her re-creations of her observations of the world around us…hilarious and charming with her honest and casual style of storytelling.
Drum Media

She had men laughing and women crying throughout. Highly recommended for all!
Squirrel Comedy

Kitty Flanagan is well known to all Australians for her brilliant sense of humour and comedic character.  Kitty engages, entertains and leaves audiences laughing.  A career filled with highlights including television, Kitty is a great choice for a comedian or MC for any conference or event.

One of Australia’s best known and loved comedians, Kitty appears regularly on the comedy/quiz show, Have You Been Paying Attention. She’s also known for her segments on The Project and The Weekly with Charlie Pickering as well as for playing the role of Rhonda on the award-winning ABC show, Utopia.

Before that she was one of Australia’s least known waitresses at Pizza Hut. At school Kitty was a small, stick like child with very large front teeth and fuzzy hair. Nothing much has changed.

She has played all over the world including Japan, France, Germany, Singapore, Switzerland and Holland and performed at all the Festivals including Edinburgh, Montreal, Kilkenny, even Cape Town and Joburg and now tours Australia relentlessly, determined to bring her award winning stand up shows to every regional arts centre and theatre around the country. If she hasn’t been to your town, and you have a stage of some sort then please drop her a line and she’ll be there shortly.

She’s been nominated for a Helpmann Award (Charming and Alarming) and her subsequent show, Hello Kitty Flanagan, won the Best Comedy Award Winner at the Adelaide Fringe Festival, was nominated for another Helpmann award and also a Barry Award at the Melbourne International Comedy Festival.

In 2018 Kitty added author to her long list of achievements, releasing Bridge Burning & Other Hobbies, a collection of laugh out loud cautionary tales and in 2020 ‘488 Rules for Life’ which is Kitty Flanagan's way of making the world a more pleasant place to live. Providing you with the antidote to every annoying little thing, these rules are not made to be broken. 488 Rules for Life is not a self-help book, because it's not you who needs help its other people.