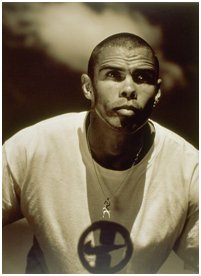 Kyle Vander Kuyp travels from VIC
Fee Range: Up to $5000


Kyle Vander Kuyp was born in Paddington, Sydney in 1971 and is a descendant of the Yuin Clan of south coast NSW and the Woromi Clan of north coast NSW. At five weeks old, he was adopted by Bernard and Patricia Vander-Kuyp.

He is a 12-time national hurdles champion (including eight times consecutively), an Australian record holder in the 110m and 60m hurdles events, and has competed at two Olympic Games, four World Championships and four Commonwealth Games.

Since retirement from athletics, he has been an Ambassador for Centrelink's Indigenous Ambassador Program. The Department of Human Services' Indigenous Ambassador position involved visits and talking face-to-face with Australian Aboriginal and Torres Strait Islander peoples. The role helps build awareness of government services, encouragement and education on seeking out information and exploring how services delivery can be improved and tailored to better meet the needs of Australian Aboriginal and Torres Strait Islander peoples. The position also involved providing valuable feedback to the Minister of Human Services. This program provided services nationally at Aboriginal and Torres Strait Islander events at NAIDOC, Sporting carnivals, Job Expos, Centrelink Offices, Medicare, Australian Hearing, Child Support Agency and Vibe Australia.

• Highlighting the dangers of drug, alcohol and other substances abuse;
• Setting examples of healthy eating, good nutrition and hydration;
• Encouraging and enhancing pathways for participation in physical activity and sport;
• Teaching and modelling good hygiene practises;
• Addressing specific issues identified as most relevant by individual community; and
• Partnering with community leaders as well as health and education professionals to launch new programs and initiatives.

As a Role Model and Ambassador for Red Dust, Kyle believes it is important to commit and build strong relationships with communities, teachers and the students, and that having the opportunity to continue ongoing support and duty of care improves and reinforces the efforts in terms of health, education and the fulfilment of human potential.

In 2007, Kyle was appointed a Mentor/Assistant Manager and Coach to the Indigenous Talent and Identification Program and Outback Athletes Program, a joint initiative by Athletics Australia (AA), the Australian Institute of Sport (AIS) and the Australian Sports Commission (ASC). This program provided the opportunity for Australian Aboriginal and Torres Strait Islander athletes to:

In 2003, Kyle was the recipient for the Dr. Charles Perkins Award, the 2004 Deadly's Award for outstanding contribution to Aboriginal and Torres Strait Islander Sports and in 2005 named Athlete's Athlete at the Telstra Athlete of the Year Awards. In 1998 he was Cleo's Bachelor of the Year.
Subscribe
© 2022 Platinum Speakers