Print
Lehmo is a well-known radio host and comic performer.  He is also one of the popular co-hosts of Australia’s much loved AFL football show ‘Before the Game’.  A great entertainer and Master of Ceremonies, Lehmo brings each event to life. 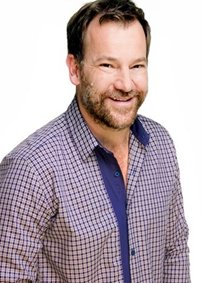 “Lehmo… you had 300 accountants and guests in stiches from the moment you walked on stage at our National Congress in Melbourne. You have a great ability to work the room and get maximum enjoyment for all. We have had so much positive feedback on your performance and hope you can come back again soon! Thanks a million!”

“The room of over 500 guests in hysterics and was undoubtedly a highlight of the evening! Extremely funny and appropriate performance, lovely guy and a pleasure to work with.”

“Lehmo was an excellent MC and fitted perfectly for our event. He was easy to work with and was flexible with the continual changes to the run sheet.”

"Lehmo is a fantastic personality to work with and ensured that our dinner was a huge success, I would recommend him to any organisation looking to put some fun and enthusiasm into an evening."
Greg Stirling - Senior Brand Manager, Jacob’s Creek Wines

"Lehmo is to be congratulated for his preparation and delivery as it resulted in a super gig and we had lots of positive feedback from a potentially tough audience. At a charity golf day there was nothing below par in Lehmo's performance! We greatly appreciate his support for our Foundation and do not take this for granted. He will do us any day."
Mark McGill - General Manager, McGuinness McDermott Foundation

"I have been meaning to email you all day to thank both you and Lehmo. I'm pretty sure it was the most successful event in the 2 years the Committee has been organising these functions in terms of numbers attending, and we received lots of positive feedback afterwards. I think all of us could relate to some of the things Lehmo dreaded about being a 'professional', which made the talk relevant as well as very funny."
Stephanie Burke - Young Professionals of South Australia

Lehmo is a well-known radio host and comic performer.  He is also one of the popular co-hosts of Australia’s much loved AFL football show ‘Before the Game’.  A great entertainer and Master of Ceremonies, Lehmo brings each event to life.

Believe it or not, Lehmo started off his professional life as a Chartered Accountant. For many years - he says too many - Lehmo lived his life crunching numbers until he found the world of entertainment.

Lehmo’s radio career started as co-host of SAFM breakfast show in Adelaide. In 2007 and 2008 Lehmo co-hosted the weekday drive shift Wil & Lehmo on Triple M, having too much fun with his great mate Wil Anderson and an amazing variety of local and international guests. 2009 saw Lehmo team up with Brigitte Duclos to form Mix Mornings with Brig and Lehmo on Mix 101.1 for 3 years. In 2012 they took over the Gold FM breakfast shift and continue to entertain Melbourne with their unique brand of humour 6-9am weekdays. Lehmo is back on the airwaves in 2018 as host of ABC radio’s Grandstand.

Aside from being a regular co-host of The Project, filling in for Dave Hughes every Friday and Sunday, Lehmo is currently a panelist on the popular network 10 AFL show Before The Game. Every week during the AFL season the panel take a look at the lighter side of the game and interviews its biggest names. The show has been running since 2003 and has been Logie nominated for best sports show on seven occasions. Lehmo has also had regular guest spots on The Fat, The Glasshouse and has appeared on Good News Week, Hey Hey It's Saturday, Headliners, ROVE Live and even Neighbours.

Lehmo has also had cameos in two feature films, including the latest Working Dog film Any Questions For Ben?

Lehmo is one of Australia's most experienced and widely travelled comedians. Aside from regularly headlining the top venues in Australia, Lehmo's extraordinary knack of making people laugh has seen him jet around the world to excite audiences in New York, London, Edinburgh, Johannesburg, Toronto, Kuala Lumpur, Singapore and Hong Kong.

Lehmo has also made multiple trips to the Middle East to entertain the troops and broke the Guinness World Record for the most jokes told in an hour (549) beating the previous record by 50 jokes.

Lehmo also broke the Guinness World Record for the most jokes told in an hour (549) beating the previous record by 50 jokes. Lehmo's live credits across the U.K include the 1996 and 1997 Edinburgh Fringe Festivals, the Comedy Store and Jongleurs - the largest chain of comedy clubs in Britain, and The Boston Comedy Club and The Gotham Comedy Club both in New York City.

Overseas television demand for Lehmo has seen him appear on England's BBC TV Comedy Showcase and as a regular compere on Britain's longest running television stand up show, Stand up Live.

In 2018 Lehmo toured the country with his new stand up show Happy Angry.