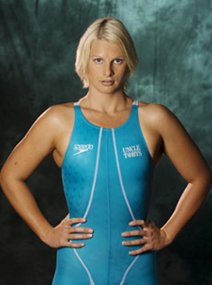 A dual gold medallist at the 2008 Beijing Olympics, Leisel is one of Australia’s most celebrated athletes and is regarded as one of the world’s greatest ever female swimmers. Leisel now brings her brilliance to the stage as an inspirational corporate speaker and health and lifestyle icon in an amazing story of personal growth, inspiration and success.

Leisel was the youngest member of the Sydney 2000 Olympic Swimming Team and the youngest ever Olympic medallist in Australia’s history when she won silver in the 100m Breaststroke (B) and 4x100m Medley Relay (MR). At 18 years, Leisel brought home Olympic gold, silver and bronze and set a new World Record with the medley relay team at the 2004 Athens Games.  And most recently at the 2008 Beijing Olympics, Leisel won 100mB and 4x100m MR gold and 200mB silver.

Leisel’s determination in the pool, her ability to perform under pressure and her positive attitude and honesty has earned her international praise. In 2006 Leisel was named World Swimming Magazine’s Swimmer of the Year. At the 2006 Commonwealth Games Leisel became the first woman in history to complete the 50mB, 100mB and 200mB treble, was named Swimmer of the Meet and was honoured to be selected as the 427 strong Australian team flag bearer at the Closing Ceremony.

Leisel has appeared in numerous magazine shoots and feature stories, she has been the promotional face for a line of beauty products and the recipient of countless awards. The Confederation of Australia Sport awarded her the 2005 & 2006 Australian Female Athlete of the Year, she was named the 2005 World Female Swimmer of the Year, 2006 Suncorp Metway Young Queenslander of the Year, 2006 Nickelodeon Kid’s Choice Awards (Most Popular Sports Person), and the Australian public voted her the 2006 Telstra People’s Choice Award (first female ever)!

Over her 14 year professional career Leisel has worked with some of Australia’s most loved and trusted brands, including, TAG Heuer, Speedo, Telstra, Uncle Toby’s, Hyundai and Thalgo and more recently as an Ambassador for QANTAS, Coles and FOXTEL. This brand confidence in Leisel's consumer appeal was demonstrated in a survey produced by Readers Digest where Leisel was voted Australia’s most trusted Athlete and the 25th most trusted Australian in 2009.

Out of the pool Leisel established herself as an exceptional media talent with extensive experience in interviews, documentary and TV filming and TV commercials across both Free-To-Air and Pay TV. Leisel’s roles have included FOXTEL Ambassador for both the 2010 Delhi Commonwealth Games and the 2012 London Olympic Games and appearances in the 2010 Coles documentary “The Making Of” and WSPA documentary “Changing Views of Africa”.

In 2013 Leisel became a panellist on Fox Sports “Back Page” and is confirmed for several entertainment and lifestyle programs. Leisel is able to tailor her presentation to meet the needs of the client.