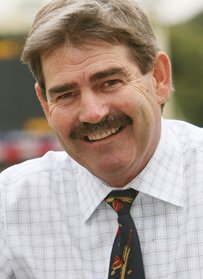 Les Burdett OAM travels from SA
Fee Range: Up to $5000

Renowned curator Les Burdett is one of cricket's most popular identities, having served Adelaide Oval for 41 years. In that time, he's earned the respect of players, administrators and spectators world-wide.

Les Burdett is one of seven boys and was born and educated in Adelaide. He joined the staff of the South Australian Cricket Association Inc. at the famous Adelaide Oval in 1969 and has held his current position as Oval Manager since 1978.

He is responsible for the preparation and presentation of the Adelaide Oval for international, national and other cricket matches as well as all football codes, concerts and special events.

Les' expertise has been in demand in various venues around the world including India, South Africa and Kuala Lumpur. He has consulted to the International Cricket Council and Cricket Australia, and since his retirement in July 2010, has established his own consultancy.

Les is in demand as a guest speaker, captivating audiences with stories about his experiences in Australia and abroad and the many characters he has met over four decades at the Oval.

Les is an ambassador for SA Variety, passionate about helping underprivileged children.

In 2008, he was awarded the medal of the Order of Australia for services to the turf management industry, charities and the community.