Print
Known by many as the best mentalist in the world, Lior Suchard’s performances of mind reading, thought-influencing and telekinesis have earned him international acclaim and have has amazed live audiences around the globe. No penny for your thoughts needed here - he’ll know what you’re going to say before you do, and he’ll have the whole audience laughing in the process. 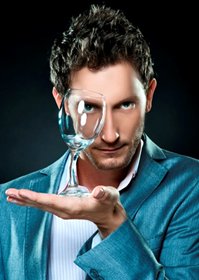 “Absolutely spectacular! The staff were completely knocked over by it. I really cannot thank you enough.”
Tony Blair

“I’ve seen things but that is the most amazing thing I’ve seen in my life.”
Larry King

"He's such a crowd-magnet and people will still talk about him for days after seeing him perform."
HR Manager, Hewlett Packard

"He was incredible and he knows what’s good for business."
Motorola Marketing Team

"Everyone should have ‘The Suchard experience’. I’ve never seen anything like it."
Microsoft Director

Known by many as the best mentalist in the world, Lior Suchard’s performances of mind reading, thought-influencing and telekinesis have earned him international acclaim and have has amazed live audiences around the globe. No penny for your thoughts needed here - he’ll know what you’re going to say before you do, and he’ll have the whole audience laughing in the process.


Lior’s performance is the perfect combination of wonder and comedy, and his routines often include correctly guessing the name of audience members’ first loves, moving objects without touching them and influencing feelings - both physical and mental. His shows are punctuated with full audience participation, lots of surprises and plenty of humour.

Whether it is a big conference, trade show, small reception, intimate company meeting or gala event, Lior has the power to transform any corporate event into a unique occasion. His energetic performance guarantees to entertain, inform and motivate both clients and employees, and get them talking for all the right reasons. Most of all, he will drive home the client’s business message in a way that won’t be forgotten. He can tailor his performance to client needs, incorporating any business messages, specific targets or company logos or slogans in his acts, which he has performed for some of the world’s biggest companies.

A regular on television internationally, Lior is a frequent guest of Jay Leno and has been invited back five times to wow guests including James Spader, Kim Kardashian, and Zac Efron. His skills have almost reduced an astonished Barbra Walters to tears on The View, and Lior has been invited to perform for Barbra Streisand, Bill Clinton, Warren Buffet and Bill Gates.

DOWN TO BUSINESS
CEOs of the world's top companies regularly book Lior to perform and MC at business events to draw in potential customers or motivate employees with his astonishing display of mind-reading trickery and humor. Lior has also been invited to attend more intimate, crucial business meetings both by businessmen and politicians as a way of breaking the ice.

SUPERNATURAL ENTERTAINMENT
Adding to Lior's talent as a mentalist, is his natural ability for creating an all-round entertaining performance. Throughout his live show, 'Supernatural Entertainment' , Lior relies on full audience participation to perform supernatural feats far beyond telepathy and mind reading. He uses members of the audience to perform his acts, interacts with them and elates their senses by taking them on a exciting adventure built on drama, tension and astonishment doused with a huge sprinkling of humor, comedy and fun.

A MASTER MIND
Do you believe someone can read your mind? Lior Suchard can. He can delve into your innermost thoughts, and know what you are going to say even before you do. His outstanding performances of mind reading, thought influencing, predicting and telekinesis have earned him international acclaim as a top class supernatural entertainer and mentalist from members of the public, to the best- performing CEOs worldwide and Hollywood celebrities.