Print
Luke is without doubt one of the most versatile ‘all rounder’ male personalities currently on Australian TV. He has an outstanding gift for hosting live TV due to his ability to think on his feet whilst millions of viewers are watching him, and... 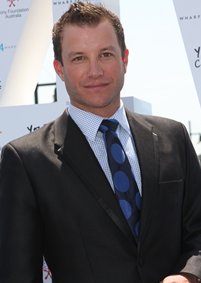 Luke is without doubt one of the most versatile ‘all rounder’ male personalities currently on Australian TV. He has an outstanding gift for hosting live TV due to his ability to think on his feet whilst millions of viewers are watching him, and not lose a beat in his delivery. He is equally talented as an actor and has had major roles in prestigious Australian dramas and has a key role in a feature film due for release in 2014.


Luke’s passion for acting started at an early age and he performed in all his school musicals and plays including lead roles in "Mid Summer’s Night Dream" and "Man of Steel" in 1996 and 1997.

He came to public attention when he starred as Zac Croft for two years on the Australian teen drama television series Heartbreak High. He later moved on to hosting television programs such as series The Big Arvo and Popstars Live and ‘Kellogg’s Iron Man’ series.

Luke made a return to acting in much loved Aussie drama series McLeod's Daughters as Patrick Brewer, appearing on the show between 2005 to 2009. He also appeared in a six-month recurring role as Angelo Rosetta in Home and Away, where after becoming a viewer favourite, he was then upgraded to series regular in this hugely popular Soap.

Luke also appeared in Channel Nine’s ‘Singing Bee’ as well as host the series ‘Hole in the Wall’.

In 2008 Luke discovered another talent, and was crowned Dancing with the Stars champion along with dancer and mentor Luda Kroitor.

In 2010, Luke was announced as the new host of The X Factor, replacing Matthew Newton, who stepped down from the role. The show went on to become one of the highest rating series on TV and a huge commercial success with massive media coverage.

Luke also began talks to appear in a new Australian drama series Wild Boys. Luke returned as host for The X Factor in the fourth series which is on air now through to November 2013 with its new line up of celebrity mentors including Dannii Minogue. In 2010, Jacobz was nominated for the Silver Logie Award for the most popular actor for his role on Home and Away.

Luke is an extremely accomplished MC and has hosted many major events ranging for Race Days at Royal Randwick to the prestigious Carols in the Domain, and is known for his great ad lib talent and for his ability to engage the crowd.