Magda Szubanski AO is one of Australia’s most courageous and effective advocates for LGBTQI rights, diversity and inclusion. Her efforts to advocate for gay marriage in Australia were critical to the Yes vote’s win. Magda is also a multi award winning comedian; actor; producer; and author, and a powerful keynote speaker. 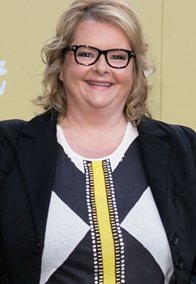 Magda Szubanski AO is one of Australia’s most courageous and effective advocates for LGBTQI rights, diversity and inclusion. Her efforts to advocate for gay marriage in Australia were critical to the Yes vote’s win. Magda is also a multi award winning comedian; actor; producer; and author, and a powerful keynote speaker.

Magda was named the ‘Most Talked about Person of 2017″ recognising the ‘crucial’ and ‘devastatingly effective’ role she played in the complex and difficult 2017 Same-Sex Marriage Survey. Vogue Australia included her in their list of 2018 “Game Changers” for her work on the campaign.

Magda has received many other accolades in the course of her career, including a Mo Award, seven Logie Awards, three Awgie Awards, two People’s Choice Awards, two Astra Awards and the AFI for Best Supporting Actress for her performance as Australia’s favorite second-best friend, Sharon Strzelecki, a character she created herself.

Magda was awarded the 2018 Victorian Award for Excellence in Women’s Leadership by Women and Leadership Australia and was the 2018 recipient of the nation’s top free speech honour, the Voltaire Award, given by Australia’s oldest human rights organisation, Liberty Victoria. In 2019 she was made a member for the Advisory Board of the Australian Institute of Human Rights at UNSW.

Magda’s long standing fame led to her playing a key role in achieving same sex marriage in Australia During the campaign to achieve same sex marriage, Magda spoke at numerous marriage equality fundraisers, and advocated tirelessly, with reason and dignity, for equality. Her most notable appearances included a pivotal debate on the ABC’s Q&A, interviews on A Current Affair and an address she gave at the National Press Club, ‘What it feels like to be an unwilling human guinea pig in a political experiment’.

Magda completed a Bachelor of Arts at Melbourne University, majoring in Philosophy and Fine Arts. After early training with the ABC-TV cult show D-Generation, Magda shot to fame in 1989 in response to the huge variety of comic characters she created. For over thirty years Magda has survived and thrived at the top of the show business tree – a notoriously fickle and competitive industry.

She was a key player in some of this country’s most successful, iconic and groundbreaking shows – Kath and Kim, Fast Forward, D-Generation, and Big Girl’s Blouse, sketch comedy Fast Forward, which played for several seasons and became one of Australia’s highest-rating comedies. She had an emotional journey when the SBS television show Who Do you think You Are? did a story on her family’s heritage.

Film credits include Babe, The Crocodile Hunter: Collision Course, alongside the late Steve Irwin and The Golden Compass, with Nicole Kidman and Daniel Craig. Australian films Dr Plonk directed by Rolf de Heer, Bran Nu Dae by Rachel Perkins and starring alongside Ronan Keating in the musical comedy, Goddess in 2013. In 2017 she starred opposite Michael Caton in Ben Elton’s Three Summers.

Magda’s many stage appearances include hit productions of Guys and Dolls, the late Nora Ephron’s Love, Loss and What I Wore, The Melbourne Theatre Company production of The 25th Annual Putnam County Spelling Bee, the national tour of Grease: The Arena Spectacular with John Farnham. In 2012 she performed alongside Geoffrey Rush and Hugh Sheridan in Simon Phillip’s A Funny Thing Happened On The Way To The Forum.

Magda is also a best-selling, award-winning author, following the release of her internationally acclaimed memoir Reckoning. Released late 2015, Reckoning won a slew of literary awards including winner of the 2016 ABIA Book of the Year, Biography of the Year, Booksellers Choice Award, NSW Premier’s Literary Awards, the Indie Award for Non-Fiction; Winner Victorian Community History Award and was shortlisted for several more awards including the National Biography Award.

Relating the story of her father’s activities as an assassin in Nazi-occupied Poland, Szubanski’s story of intergenerational trauma, migration and coming-of-age as a young gay woman received rave reviews.

The Australian described it as “a riveting, overwhelmingly poignant autobiography by a woman of genius…Every library should have it, every school should teach it.”

The Sydney Morning Herald wrote, “This is documentary writing of the highest order…Anyone who doesn’t adore Magda Szubanski the clown will be awed by Szubanski the A-grade non-fiction writer.”

She is a frequent guest on several television shows including The Today Show, Sunrise, ABC Breakfast, The Project, A Current Affair, The Morning Show, Mornings, and Studio 10 among others.

Over the years Magda has campaigned for several charities including Very Special Kids, Starlight Foundation, Oxfam, and Royal Children’s Hospital.

In 2019, Magda received an AO for her distinguished services to the performing arts.

Magda is available for keynote speaking and master of ceremonies.

Magda speaks on issues which often divide many including LGBTIQ. She addresses these issues earnestly and with a touch of lightness.

Magda can speak on almost any topic you care to think of, from international politics, the state of the nation, from the entertainment industry to her journey and topics in between.  She’s happy to talk from a completely serious perspective or with great humour.

Recently Magda wrote and published The Reckoning, a book exploring the themes of family and repercussions over time she explores these interesting and sometimes challenging themes as a keynote.

How I taught myself to be more courageous

Magda uses lessons from her Nazi-fighting family to explore where courage originates. She asks if there is such thing as intergenerational courage, and if so, did it help her to help win a 21st-century civil rights battle?