An award-winning television presenter and meteorologist, Magdalena Roze  is passionate about  the environment,  sustainability and lifestyle. A sought after Master of Ceremonies, Magdalena is enthusiastic and engaging. 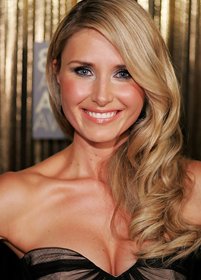 Magdalena Roze travels from NSW
Fee Range: Up to $5000

An award-winning television presenter and meteorologist, Magdalena is one of Australia’s most versatile talents with almost ten years’ experience presenting live television including co-hosting Network Ten’s The Project, covering two Olympic Games, co-hosting the Australian Grand Prix coverage, reading news and weather on both breakfast and prime-time bulletins, and reporting nationwide on some of the biggest natural disasters in Australian history.

After completing a Bachelor of Arts in Media and Communication at the University of Sydney as a scholarship holder, Magdalena’s media and meteorological qualifications were extended through her Diploma in Atmospheric Science at Macquarie University, being awarded both the 2009 Biophysical Environments Prize and the Australian Meteorological and Oceanographic Society Prize for her academic achievements.

2011 saw Magdalena join Ten News as meteorologist and journalist for the National Weekend News. She later became the much-loved Weather Presenter on Ten’s Breakfast. In 2011, she was nominated once again for both Best News Coverage and Most Outstanding Performance by a Broadcast Journalist at the ASTRA Awards.

Before a television executive convinced her to be on-air, Magdalena was a researcher and producer on travel programs for the Nine Network and BBC in London including Getaway, Things to Try Before You Die and Uncharted Territory.


Magdalena’s recently combined her passion for climate and food as part of the team behind Earth Hour’s “Planet to Plate” cook book. Respected for her knowledge and love of food, she is also a reviewer for the 2015 SMH Good Food Guide, and has hosted numerous events with chefs including Marco Pierre White, Heston Blumenthal, Massimo Bottura and Peter Gilmore. She is also a reviewer for the prestigious Mr & Mrs Smith boutique hotel website and regular contributor to Delicious online.

Passionate about the environment, Magdalena is an ambassador for Earth Hour, Planet Ark and RSPCA’s ‘Set A Sister Free’ campaign. She has also been an active ambassador for cancer charity Redkite for over 5 years.

Magdalena loves exploring and enjoying the good things in life- food, travel, wine, fashion and all aspects of wellbeing. Inspired by the seasons and driven by respect for nature, she is also enthusiastic advocate for all that is sustainable, artisanal, ethical and natural.

Magdalena is now also working on her blog which looks at ‘lifestyle through a weather lens’ and is a place where she can share her thoughts and ideas about how to live a happy, healthy and slightly ‘greener’ life