Manu Fieldel is a much loved chef here in Australia.  Hugely popular for his success as judge of My Kitchen Rules (MKR), Manu has also participated in other cooking shows such as Ready Steady Cook and Master Chef Australia. 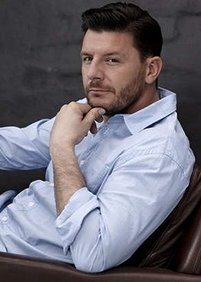 It seems that Manu Feildel was destined to become a great chef and entertainer from the moment he was born. His great grandfather was a pastry chef, his grandfather and father were chefs, and his mother is a great cook – but as a child Manu saw his future on the stage rather than in the kitchen.

At 13 years old Manu joined an amateur circus school however, by the time he turned 15 he had decided that the road to becoming a professional clown was not for him. He started as an apprentice in his father’s restaurant and quickly progressed to a fine dining restaurant to finish his apprenticeship. But soon thereafter the travel bug bit Manu and he packed his knives and headed for London.

It was there, working in the top French restaurants in the UK, that Manu really began to understand and love the career he had chosen. In 1999 Manu flew to Australia and it was in Sydney that his career started to move at a lightning pace — opening Sydney Morning Herald Chef’s Hat winning kitchens across Sydney, and eventually his own restaurant in Paddington.  Manu’s newest restaurant venture, Le Grand Cirque, opened in Melbourne in March 2014.

Manu Feildel is one of the most popular new personalities on Australian television as co-host of the long-running Channel7 series My Kitchen Rules, but he has been a feature on Australian television for over a decade. His appearances include Channel Ten’s Ready Steady Cook, The Circle, Sunrise, Channel7’s Morning Show, 9am with David & Kim and co-hosting the series Boys Weekend.

My Kitchen Rules debuted in 2010 and has been a huge hit for over 6 series.  Extremely popular with a huge number of followers.

In 2011 Manu won the 11th series of Dancing with the Stars showing that he has an array skills outside the kitchen as well. Following on from his popular first book — Manu’s French Kitchen, his second book — Manu’s French Bistro was published in March 2012. His 3rd book French for Everyone was released in April 2014.