Mark Olive (aka ‘The Black Olive’) is Australia’s renowned Indigenous Chef with his The Outback Cafe series televised in living rooms all over the planet. 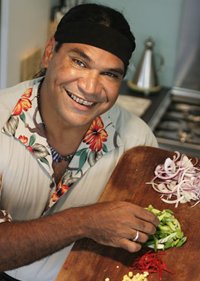 Mark Olive, known as ‘The Black Olive’ is Australia’s most celebrated and renowned Indigenous chef. He has been cooking for more than 30 years and his charismatic style and creative approach to food have developed him an esteemed reputation and a large following in Australia and around the world.

As a Bundjalung man, Mark’s family originated from the Northern Rivers region in NSW. Born in Wollongong, he became interested in cooking as a child after watching his mother and aunts prepare meals. He trained under a European chef and has worked in a variety of kitchen environments ranging from theatres, universities, health services, film sets and in a lá carte restaurants around the globe, as well as cooking in the bush and the earth, some of nature’s greatest appliances.  In 2008 Mark established his own catering business to share the tastes and flavours of Indigenous Australia that he has melded with his contemporary cooking style .

Mark has cooked and presented locally in  Melbourne, across Australia and around  the world and is in frequent demand to present and appear at food events, Indigenous celebrations and representing Australia’s vibrant culinary and cultural tapestry, right across the world.

Mark is also a host of cooking, lifestyle and travel shows, with his The Outback Cafe series televised in living rooms all over the planet. Mark has a passion for fusing native and Indigenous Australian ingredients with contemporary cooking techniques to create a dynamic and unique gastronomic philosophy.  This has led to a remarkable  international profile, and the creation of Black Olive Catering, an indigenous catering company in North Melbourne, Victoria.

Along with his daily business operations, Mark now cooks regularly for clients such as Tourism Australia  at large corporate, public and cultural events around the country and the world, bringing his signature infusions of contemporary outback flavours to every occasion.

In 2010 Mark’s business was chosen as one of the destinations on Oprah’s Victorian itinerary when she travelled to Australia with her Ultimate Audience. Her lucky guests were treated to a cultural experience of indigenous food, art and storytelling during Mark’s infamous cooking demonstration.

2013 is a big year for Mark – with more local and international travel taking him to food and cultural events around the country and abroad, he will continue to champion the cuisine for which he has become known as well as providing guidance and opportunity to young Indigenous Australians – in the hope of handing down his knowledge and skills to the next generation of cooks.

Due to his success, Mark has been selected to be a member of Tourism Australia’s ‘Friends of Australia’ program, which was “created to harness the power of bright and influential individuals who are making a name for themselves on the world stage, and who have a genuine affinity with Australia”.

Mark Olive is available for appearances and events and would be happy to be considered as a part of your next celebration.