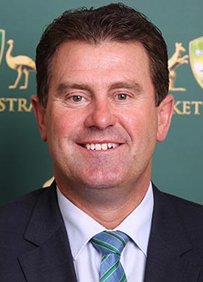 Mark was hands down the best conference dinner from the sporting realm we have engaged to date. His passion and enthusiasm for cricket and life in general was well received by all regardless of sporting preference or nationality. He was extremely generous after this speech interacting with attendees. He hit his conference dinner speech for a six!

During the decade the 1999 Australian of the Year opened the batting for his country and the five years he was its highly-acclaimed and successful captain, the New South Welshman, voted Australia's most admired sportsperson by Inside Sport magazine in the year of his retirement, was in the vanguard of a triumphant era for Australian cricket, departing the game with his country clearly the No. 1 Test-playing nation.

During the Mark Taylor regime, the record books were constantly updated on both a team and personal front. Taylor, himself, left the game with several proud personal milestones.

Mark Taylor serves as a board member of Cricket Australia. A member of the Nine Network’s cricket commentary team, Taylor is considered one of Australia’s most inspirational corporate speakers. To mark his playing days with Northern Districts in Sydney, Mark Taylor in 2011 had the honour of having the club’s home ground, Waitara Oval, renamed Mark Taylor Oval.

Away from cricket, Mark Taylor’s other sporting love is recreational fishing. In 2012, he was appointed an ambassador of Keep Australia Fishing. Taylor is considered one of Australia’s most inspirational corporate speakers.

Tales from the Tour Bus

Winning Against the Toss