Matt Hall is a unique story of an ordinary man doing extraordinary things. A highly self-disciplined risk manager, Matt Hall is respected for his ability to communicate with people at all levels.  An outstanding motivator, Matt Hall will inspire your audience. 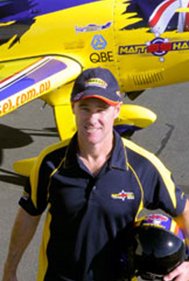 Matt Hall spoke recently at our annual conference, his presentation was both enthralling and inspiring. His story of courage and perseverance captured the interest of our attendees and in fact caused many to comment on how valuable his speech was. Matt spoke with such intensity and passion, he drew the audience in and painted a vivid picture of his experiences. His determination throughout his career, although unique in its character, is something that we can all aspire to.

QBE booked Matt Hall a number of times to speak to pilots at aviation events in 2011 and 2012 and we were so impressed by his ability to captivate an audience that we engaged him as the QBE Airmanship Ambassador for 2013.

In his role as the Airmanship Ambassador Matt educates pilots on safe pilot practices whilst using analogies and lessons from his own amazing experiences in the air. The risk mitigation and risk management take away from Matt’s presentations is so thought provoking that it can be applied to any industry or vocation.

I recommend Matt highly as a guest speaker, whether it is in the area of Airmanship and Risk Management or simply entertaining tales from his inspirational life story. QBE are delighted to support Matt and have our brand associated with him.

After finding myself leading a group of highly motivated and skilled Technicians, the challenge that lay ahead was being able to tap into the minds of this team to heighten their Risk Management appreciation and capability.

I engaged Matt Hall to help kick start this journey and what we received was far beyond what I could have ever expected. Our experience with Matt not only broke the ice, it made us more inquisitive about how great we could really become.

Matt’s real life experiences that he shared, the knowledge that he imparted and the “I’m just the same as you” approach that he has left us:

·         all reflecting and acting on the opportunities that we have to be safer people (and more importantly the reasons why!)

·         almost as a by-product introduced a common and down to earth Risk Management language that still echoes around our work environment.

I would encourage any organisation to talk with Matt and his team if you are looking for a way to inspire and motivate a mind-set change to Risk Management.

Matt Hall is a unique story of an ordinary man doing extraordinary things. A highly self-disciplined risk manager, Matt Hall is respected for his ability to communicate with people at all levels.  An outstanding motivator, Matt Hall will inspire your audience.

A retired Wing Commander Fighter Pilot in RAAF, he is a combat veteran of Iraq, with USAF medals for heroism under fire in his F-15E, supporting troops on the ground.

Matt Hall is a third generation pilot, a former RAAF Fighter Combat (Top Gun) Instructor, international unlimited aerobatic competitor and in 2009 became not only the first Australian to ever compete in the Red Bull Air Race World Championship but also the first Rookie to finish a Red Bull race and indeed the entire season on the podium.

In 2009,Following a decorated career as a RAAF fighter pilot, Australia’s very own top gun pilot Matt Hall became the first  Australian ever to compete in the Red Bull Air Race World Championships, the fastest and most exciting motor sport series on the planet. Hall finished the season third overall to become the first rookie in history to end his debut season on the podium. He followed that up with two podium finishes in 2010, two more in 2014 and seven in 2015, including victory in Spielberg and Las Vegas, finishing  a close second in the final standings.

Now partway through 2016 he is again in second place having won two of the six rounds contested, with two still remaining.

Matt is a highly credentialed and skilled fighter pilot with nearly 2000 F/A-18 Hornet hours, over 500 hours in the F-15E Strike Eagle (including combat), over 1100 hours in light aircraft and over 500 hours doing aerobatics.

Matt is an experienced speaker who specialises on his core strengths of Goal Setting (short, medium and long term), Risk Management (in all areas of life from getting shot at to career changing decisions), and Prioritization (time management).

He is able to convey his story of humble beginnings, but setting unimaginable goals then pushing himself hard to exceed them. A highly self-disciplined individual, Matt is respected for his ability to communicate with people at all levels and is greatly admired for his focus under pressure and leadership qualities. He is an outstanding motivator and is a popular public speaker, mentor and role model.

Matt Hall is a fantastic story of a very proud Aussie who always looks forward and now says, “…I can and I will…”.

Matt uses his own experiences to demonstrate that ordinary people can achieve extraordinary things with the correct attitude, vision and risk management. This is backed up with never released video footage of Matt flying F-18s in Australia, and combat footage in the US Air Force. Matt also shows in-cockpit footage of racing and his much-publicised crash in Windsor Ontario where he managed to fly his aircraft out of the Detroit River, after momentarily stalling while racing.

1. Dreams – It is Matt’s belief that people have forgotten how to Dream BIG. It nearly happened to him. He grew up believing he was going to be a pilot, though the closer he came to leaving school, the more he was steered toward a ‘normal’ career. It was through a chance meeting with an old Spitfire pilot, that some words were said that changed the way Matt viewed the world…and still does. Matt shares this story on “potential not used is wasted forever”.

2. Goals – Matt fully realises that big dreams are daunting, and easily dismissed. He has had many large Dreams…becoming a pilot as a teenager, becoming a fighter pilot, flying the F-15E, becoming an Air Race Pilot. All of these were achieved against unbelievable odds, and Matt did it with his “small stepping stones”, or goals. Matt uses his story to show how the impossible becomes reality one step at a time.

3. Team Building – Matt has managed teams from Fighter Squadrons to an International Race Team, and fully appreciates the importance of a good team. He was milliseconds away from catastrophe a number of times in his career, and it generally came down to him and his team fighting for survival…surviving a hostile environment can only be done with great support.

4. Risk Management – Think there’s risk in your job? Well there is. Think there’s risk in your day to day, everyday life? Well there definitely is. Matt has operated in risky situations most of his life but he was developed a mindset and skillset to mitigate the risk and know when too much risk is enough. It’s a fine line between managed risk for reward and risk that is destined to fail. Let him apply his risk mitigation methods to your business and staff practices.

5. Rebounding from Adversity – Matt has lost many friends in aviation accidents, has been shot at in Combat, nearly crashed an aircraft while racing, and had numerous close calls….and he keeps coming back better and stronger each time. You’ll figure it out when you listen to the way he looks at life…run with risk, always have an out, learn from all errors and keep looking forward.

ADD IN A FLIGHT EXPERIENCE:

See the world how Matt sees it. Every person has had a dream in their life where they could defy gravity and levitate to wherever they choose. Matt does this everyday, and now there is an opportunity to experience this with him and understand what looks impossible from one perspective, is completely achievable and safe from another. You will dress like Matt in a Race Suit, wear a Race Helmet, then strap into the most manoeuvrable 2 seat aircraft in Australia, Matts 2 seat Race Plane! You will get to see snippets from Matt’s entire aviation career in one flight. He will show you the basics of how he started flying, and then progress to combat manoeuvres, Unlimited aerobatic manoeuvres, and culminate in a Race Simulation (Hot Lap!). All this in the most action packed 20 minutes you will ever experience. Lucky you get to keep a video!